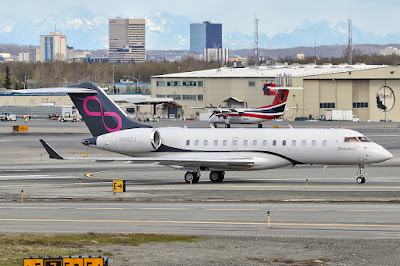 The Zetta Jet fleet has expanded to include a dozen Bombardier Global 5000s and 6000s and Challenger 650s. The Globals can accommodate up to 14 passengers, or be reconfigured to provide sleeping quarters for five to seven travelers.
In the above photo, Bombardier Global 6000 (c/n 9688) N688ZJ is seen at Ted Stevens-Anchorage International Airport (ANC/PANC) on May 8, 2017.

Since launching in August 2015, Singapoe-based Zetta Jet has quickly established itself as one of the fastest growing charter flight providers in the Asia Pacific region. Through its satellite base in Los Angeles, the privately owned operator also has extended its reach into the North American market.

But the long range of its Bombardier Global 6000 jets (6,213 nm/11,119 km) means that it also can connect travelers with Europe from major cities in China and from the U.S. That’s what has brought Zetta Jet to the EBACE show, where it has aircraft on the static display.

Zetta Jet has remained headquartered in Singapore and has merged operations with Asia Aviation Company under the core Zetta Jet Pte Ltd. brand. Advanced Air Management, which is based at Los Angeles-area Van Nuys Airport, will be renamed Zetta Jet USA. The group will expand its aircraft management portfolio under the name Zetta Jet Management.

Geoffery Cassidy will continue to lead Zetta Jet as managing director, based in Singapore, while Matthew Walter is to remain director of sales and James Seagrim director of operations. Walter and Seagrim are based in Zetta’s office in California. “The merger of both companies under Zetta Jet is a significant milestone, which will greatly strengthen our value proposition as the world’s first truly personalized private airline,” Cassidy commented last month.

In less than two years, the company has expanded to a fleet of 12 Bombardier Global 5000s and 6000s and four Challenger 650s that are averaging 100 flight hours a month. The most recent addition to the fleet was a Global 6000 delivered on April 11 to its base in Los Angeles.

Back in early November 2016, Zetta Jet signed a $129 million deal to lease four Bombardier Challenger 650s from China’s Minsheng Financial Leasing, which bought the 12-seat twinjets from the Canadian manufacturer. The new aircraft, which will supplement its larger Bombardier Global 5000s and 6000s, are now being operated out of the company’s Van Nuys North American hub.

The Global 5000 and 6000 cabins can seat up to 14 passengers and can be reconfigured to provide beds for between five and seven people. The aircraft feature Rockwell Collins’s Venue cabin management system and Bombardier Wave wireless connectivity package, based on Honeywell’s JetWave hardware and Inmarsat’s Ka-band JetConnex service. The cockpit is built around Bombardier’s Vision flight deck with a synthetic vision system and MultiScan radar as standard equipment, as well as an optional enhanced-vision head-up display.

According to Zetta Jet, it is the only Part 135 charter operator approved by the U.S. Federal Aviation Administration to fly in the polar regions. This allows it to plan shorter routes for many flights between the U.S. and Asia, avoiding fuel stops.

The company also has made significant investments in the outfitting of its aircraft cabins. It recruits cabin crew from leading aviation and hospitality industry groups, providing training at Switzerland’s École hôtelière de Lausanne. Flight attendants use luxury products such as Christofle silverware, Hermès Egyptian linens and Salon champagne.

As well as offering individual flights, Zetta Jet customers can buy 100-hour blocks of charter time at discounted rates and guaranteed availability. This allows clients to switch between the Global 5000 and 6000 models.

In April, Zetta Jet announced a new partnership with safety and risk management specialist Medaire. The company’s fleet is now datalinked to Medaire’s medical, security and travel safety services around the clock. This includes technology that allows patients and crew who are unwell during a flight to be examined and cared for by a doctor on the ground.

Posted by Michael Carter at 9:31 AM