Chesley “Sully” Sullenberger, the decorated commercial airline captain responsible for saving the lives of 155 people in a heroic 2009 landing on New York’s Hudson River, has a message for Boeing and the Federal Aviation Administration: pilots need robust training before the 737 Max returns to the skies.

“Reading about it on an iPad isn't even close to sufficient,” Sullenberger testified during a congressional subcommittee hearing on Wednesday. He asserted that recertification should require simulator training, which subjects pilots to conditions that closely emulate those in flight.

“We should all want pilots to experience these challenging situations for the first time in a simulator and not in flight with passengers and crew on board,” Sullenberger said.

More time and costs before the Max can fly?

Exactly how much and what type of pilot training is needed before Boeing’s Max can be re-certified by the FAA and returned to service has been a topic of debate, as some aviation experts point to a lack of sufficient training concerning the Max systems as a central cause in the cascade of events that led to two fatal Max aircraft crashes within five months. Meanwhile, others claim more experienced pilots would have averted crisis. Simulator training, estimated to cost hundreds of dollars per hour, if required by the FAA, will add time and cost to the Max’s return to flight.

“We must face [the emergency] first-hand in a simulator before we experience it in flight,” Sullenberger told lawmakers.

As a result of the crashes, Boeing agreed to modify all Max planes in order to feed additional sensor data into a system designed for the aircraft called MCAS, or Maneuvering Characteristics Augmentation System. The system, which automatically pushes the nose of the plane down to prevent engine stall, is known to have been activated in both the Lion Air and Ethiopian Airlines crashes that killed all passengers and crew on board.

The importance of the ‘startle factor’

Throughout his testimony, Sullenberger emphasized the significance of pilot “startle factor” and chaotic cockpit situations that play into a pilot’s emergency response capabilities.

Asked by Rep. Thomas Massie (R-KY) whether more experienced pilots would have been able to handle the MCAS-related emergencies, Sullenberger opined that it would have been unlikely they would have performed differently than the crews on the accident flights.

“I'm one of a relatively small group of people who have experienced such a crisis and lived to share what we learned about it. I can tell you firsthand that the startle factor is real. And it's huge. It absolutely interferes with one's ability to quickly analyze the crisis and take an active action,” Sullenberger said. “In both 737 max accidents, the failure of a single angle of attack sensor quickly caused multiple instrument indication anomalies, and sudden, loud, and in some cases, false warnings, creating major distractions masking the cause, and would have made it even harder to quickly analyze the situation and take effective, corrective action.”

“This is a sudden, violent, and terrifying event,” Carey testified. “So airplanes pitching up and down rapidly and violently. There's bells, warnings, and clappers sounding. Communication is difficult.”

“The Max was designed to provide the same aircraft feel as the 737. This was intended to minimize costs to Boeing's customers by allowing the Max to be certified as a 737-type aircraft. This led Boeing engineers to add the MCAS system,” he said. “Boeing failed to disclose the existence of the MCAS system to the pilot community around the world. The final fatal mistake was therefore the absence of a robust pilot training in the event of an MCAS failure.”

“We believe that the right answer right now is computer-based training,” Muilenberg told shareholders during Boeing’s annual meeting in April. “And then as part of the recurring training that pilots might do downstream, give them options for simulator training.”

Ultimately, the decision on requisite training rests with FAA regulators.

In response to whether Boeing’s position on flight training had changed since Muilenberg’s statement in April, a company spokesperson told Yahoo Finance, “Boeing continues to work with global regulators and our airline customers as they determine training requirements.”

Regarding the timeline for the Max to return to service, Boeing’s spokesperson said, “We have not given a timeline — safety is our priority and is the primary driver in the process. We have finalized the software update and the next step will be to finish certification work in the simulators ahead of the certification test flights, which will be scheduled with the FAA.”

India's biggest airline IndiGo said on Monday it had placed a $20 billion jet engine order from CFM International, a move that marks a shift away from Pratt & Whitney towards its French-American rival.

CFM, owned by General Electric and France's Safran, will provide the 1LEAP-1A engines to power 280 A320neo and A321neo jetliners already on order from Airbus by the Delhi-based budget carrier.

IndiGo has an order book of 430 Airbus planes of the A320neo family, of which the first 150 aircraft were to be powered by engines from United Technologies Corp's Pratt & Whitney.

Reuters reported earlier in June that IndiGo had chosen CFM over Pratt for what was one of the largest jet engine orders and that the deal would be for more than 600 engines, including spares.

Although the Pratt engines fitted on the A320neo aircraft are fuel-efficient there have consistently been issues with them since they entered into service in 2016, forcing IndiGo to ground its planes several times.

"The CFM LEAP engine will allow IndiGo to maintain its strong focus on lowering operating costs and delivering fuel efficiency with high standards of reliability," Riyaz Peermohamed, Chief Aircraft Acquisition and Financing Officer at IndiGo, said in the statement.

The delivery of the first LEAP-1A-powered A320neo is scheduled in 2020, IndiGo said in the statement, adding that the contract with CFM includes spare engines and an overhaul support agreement as well as a long-term service agreement.

CFM introduced its LEAP engines in India around 2016. It currently has 60 such engines operational in the country.


(Promit Mukherjee and Aditi Shah - Reuters)
Posted by Michael Carter at 5:14 AM No comments:

Boeing said it will add the jets to its official order backlog once the airline and lessor pay deposits on the jets and finalize a contract.

Korean Air, the country's flagship airline which serves Seattle, is one of the largest transpacific carriers in Asia with 16 nonstop routes to North America.

"As we continue to innovate our product offering, the 787 Dreamliner family will become the backbone of our long-haul fleet for many years to come," Korean Air Chairman Walter Cho said.

The 787-10 Dreamliner boasts 25 percent improved fuel efficiency and has about 15 percent space for passengers and cargo than the 787-9s.

"The airline has been a pioneer in Asia's commercial aviation industry over the past five decades and Boeing is honored to play an important role in their continued success," Boeing Commercial Airplanes President and CEO Kevin McAllister said.

If finalized, the order will quadruple the airline's 787 fleet to 40 airplanes as it modernizes and strengthen its long-haul aircraft fleet. Korean will introduce the 787-10 to complement its existing long-haul fleet of 787-9s and 777s.

While hundreds of Boeing 737 Max jets languish on the ground, British Airways’ parent company has signed a letter of intent for 200 of the aircraft.

A total of 346 people died when Boeing 737 Max jets belonging to Lion Air and Ethiopian Airlines crashed shortly after take-off.

In both cases, an anti-stall system known as MCAS forced the nose of the aircraft downwards despite the pilots’ best efforts to fight it.

Boeing is working on software and training updates, but at present there is no certainty about when the plane may fly again.

At the Paris Air Show this week, British Airways’ parent company, IAG, said it wanted to buy 200 of the planes.

IAG said: “It is anticipated that the aircraft would be used by a number of the Group’s airlines including Vueling, Level plus British Airways at London Gatwick airport.”

At present BA flies no short-haul Boeing aircraft. The fleet at Gatwick and Heathrow is all Airbus A320 series.

Willie Walsh, IAG’s chief executive, said: “We’re very pleased to sign this letter of intent with Boeing and are certain that these aircraft will be a great addition to IAG’s short-haul fleet.

“We have every confidence in Boeing and expect that the aircraft will make a successful return to service in the coming months having received approval from the regulators.”

The biggest operators of the 737 Max in the UK are TUI Airways, Norwegian and Ryanair.

The 15 aircraft will be in addition to the five Boeing 737-800s already leased from GECAS, announced earlier this year. "These new aircraft create additional capacity for Amazon Air, building on the investment in our Prime Free One-Day program," said Dave Clark, senior vice president of worldwide operations at Amazon.

"By 2021, Amazon Air will have a portfolio of 70 aircraft flying in our dedicated air network." Amazon's stock rose 0.9% in pre-market trading, while Boeing shares climbed 1.3% and GE's stock tacked on 0.9%. The shares gains come as futures for the Dow Jones Industrial Average rallied 144 points. 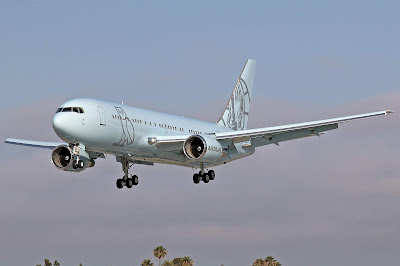 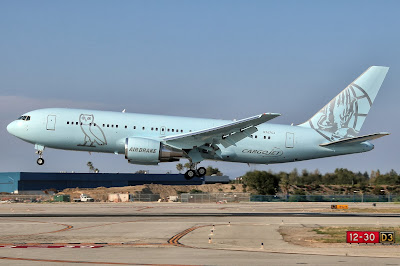 She is sporting a special Drake Air livery in support of Canadian musician Drake (Don't know if he was on board) who is using the aircraft as his VIP transport during his current tour.

Interestingly the aircraft did not park at the terminal nor an FBO but on taxiway Alpha by the location of the old Douglas commercial blast fence and where more recently the Virgin Orbit 747 had been parking.


This 767 is no stranger to Long Beach as she has been here numerous times over the years when operating with Mid East Jet her original owner as N767KS.

She made her first flight from Everett-Paine Field (PAE/KPAE) on September 20, 1996 and was delivered to the carrier on October 4, 1996.

On August 18, 2018 she was ferried from Erfurt (ERF/EDDE) to Hamilton John C. Munro International Airport (YHM/CYHM) on delivery to Elan Express as N767KS, later being re-registered to her current N767CJ registration on April 18, 2019.