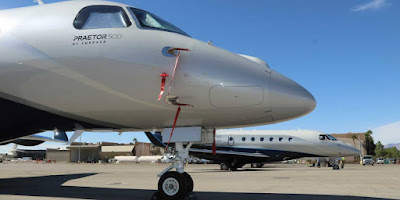 Fractional provider Flexjet revealed a $1.4 billion firm order this morning at NBAA-BACE for 64 Embraer Phenom 300Es and Praetor 500/600s, making it the fleet launch customer for the latter. Praetor 500 deliveries to Flexjet will start next month. Under the deal, the Cleveland, Ohio-based operator will also convert its Legacy 450 fleet into Praetor 500s under an FAA-approved modification.

Delivery of the Praetors will mark the fourth time that Flexjet has introduced new Embraer aircraft to the fractional market. Previous introductions were the Legacy 600 in 2003, Phenom 300 in 2010, and Legacy 450 in 2016. Its current Embraer contingent includes Phenom 300s and Legacy 450s.

“The Legacy 450 is the mainstay of Flexjet’s midsize fleet,” Embraer Executive Jets president and CEO Michael Amalfitano told AIN. “It sells out shares in these twinjets every year.

“The Praetors are the most technologically advanced and most disruptive aircraft, created to dominate the midsize and super-midsize business jet market,” added Amalfitano. “And we couldn’t be more delighted that Flexjet, our partner for more than a decade, is making the most modern aircraft available to its owners.”

In anticipation of this order, “Flexjet has been aggressive in recruiting pilots this year and recently met its 2019 goal of hiring 175 new pilots,” the fractional provider said. 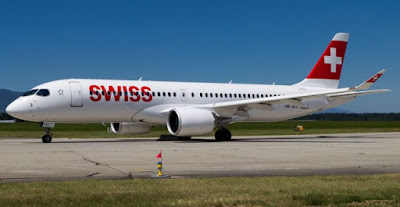 Boeing faced additional uncertainty on Wednesday over future production rates for its 787 Dreamliner after Russian carrier Aeroflot formally cancelled an order for 22 aircraft valued at about $5.5 billion (4.5 billion pounds) at list prices.

The cancellation, first reported by the Seattle Times and buried in Boeing's monthly order release, is the final step in unwinding an order that had been shrouded in uncertainty ever since the airline said in 2015 it no longer needed the planes.

But the lost business theoretically knocks a hole in the production profile for the 787 Dreamliner after the world's largest planemaker increased its build-rate to 14 aircraft per month from 12 at twin U.S. factories.

Barring new orders, Boeing faces the growing possibility that it may have to cut production back by 2022, industry sources say, piling on new pressure as the grounding of the smaller 737 MAX stretches into its eighth month.

One of the sources, who closely monitors Boeing's production plans, said the planemaker has dozens of unsold or potentially vacant 787 positions on its production line in 2022.

The actual number of unfilled production slots depends on assessments about the ability of airlines to take delivery as promised, a subjective guess that planemakers keep confidential.

While demand for the narrow-body aircraft that dominate most fleets remains strong, demand for larger, long-haul aircraft like the 787 and Airbus A330 and A350 has weakened.

Boeing won most of the wide-body orders so far this year but neither planemaker is selling as many aircraft as it would like amid trade tensions, concerns over the global economy and the increased ability of smaller narrowbodies to fly long distances.

Boeing Chief Executive Dennis Muilenburg told a conference last month that Boeing is closely tracking "macro risk areas," and had reserved slots on its 777 and 787 production lines for Chinese orders that have been held back by the U.S.-China trade war.

"There is dependency there on Chinese orders ultimately coming through," Muilenburg said.

The comments surprised some suppliers because planemakers typically raise output only after selling aircraft rather than opening the taps in the hope of winning orders later - though a strategic buyer like China might expect special treatment.

Boeing remains under pressure to reduce an overhang of deferred accounting costs on the 787 by producing more units.

European rival Airbus also has gaps in its production profile for wide-body jets, especially the upgraded A330neo and to a lesser extent the newer A350, other industry sources said.

The lull in wide-body orders has also raised questions about jetliner pricing. Multiple industry sources say aircraft are being offered at unusually steep discounts, something that officials at both planemakers deny.

Honolulu's airport ranked the third worst in North America for customer satisfaction and the second worst among large airports in annual survey of air passengers.

Inouye airport ranked behind New York's LaGuardia Airport and New Jersey's Newark Liberty International Airport as the worst among 62 airports. The airport moved two spots in the wrong direction in the large-airport category, where it was fourth worst the previous year.

Honolulu's satisfaction score was 719 out of a possible 1,000, or 17 points lower than its score last year.

The annual study conducted from October 2018 through September was based on responses from 32,276 U.S. or Canadian residents who passed through at least one North American airport. The survey scored airports on terminal facilities, airport accessibility, baggage claim, security check, check-in and baggage check, food, beverage and retail.

In the midsize-airport category, Kahului Airport remained at the bottom of the list, although its satisfaction score of 754 out of a possible 1,000 was only two points worse than last year.

The study found that after several years of growth, customer satisfaction stagnated as North American airports struggled to handle surges in passenger volume amid construction delays.

The Honolulu and Maui airports were among those that lost ground because of those factors, said Michael Taylor, travel intelligence lead at J.D. Power.

Hawaii's $3.6 billion airports modernization project just passed the halfway point, with most of the capital improvements expected to be completed by the end of 2021. The state Department of Transportation did not respond to a request for comment about the airport survey.

Access problems generally have a large effect on other airport factors, Taylor said.

"Despite the fact that you know the food or beverage might actually be better or great, it doesn't matter if people are not going to use it because they don't feel like they have time to do it," he said.

(Associated Press)
Posted by Michael Carter at 6:00 AM 1 comment:

The U.S. Federal Aviation Administration said Wednesday that aircraft operators must inspect 165 Boeing 737NG airplanes for structural cracks within seven days after the issue was found on a small number of planes.

Boeing Co notified the FAA of the issue after it discovered structural cracks on an aircraft undergoing modifications in China. The FAA said subsequent inspections found similar cracks in a small number of additional planes. The FAA said planes with fewer flights will eventually get inspected. The order covers 1,911 U.S. registered planes.

The 737NG is the third-generation 737 and version before the now grounded 737MAX, which is not impacted by the issue. Boeing said Friday it has been in contact with 737NG operators about the discovery of cracks, but added that "no in-service issues have been reported."