Another New C-17A takes to the Skies 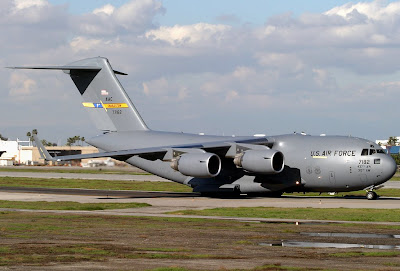 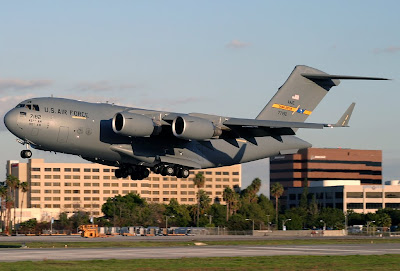 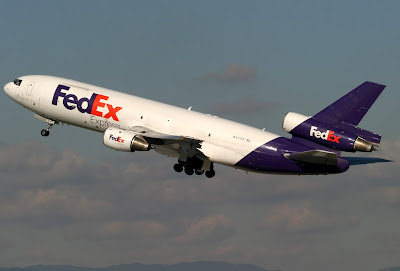 Virgin America, the California based airline that is reinventing domestic travel, is celebrating the move to its beautifully designed new location at Los Angeles International Airport’s (LAX) Terminal 3, with a special ribbon-cutting ceremony and champagne toast for guests and airport leadership.

Virgin America partnered with the airport and Los Angeles-based architects Rivers & Christian (with Lundberg Design of San Francisco) to create a chic and modern new ticket counter and boarding experience that reflects the carrier’s innovative and environmentally-sensitive design sensibilities, with a nod to the airport’s original early-1960s architecture.

“As a California-based carrier known for bringing style back to domestic flying, it was a pleasure to partner with a forward-looking airport and design team to reinvent the typical domestic airport experience – especially as we continue to grow our footprint at LAX,” said Virgin America President and CEO David Cush. “Our new face at LAX is a nod to the airport’s glamorous past, with all of the upscale, tech-savvy amenities that today’s travelers expect.”

The move allows Virgin America to strengthen and expand its long-term footprint at LAX, and brings the Virgin-Branded airlines at LAX in closer proximity. V-Australia’s much anticipated new service will arrive at Terminal 3 in the spring of 2009. The dramatic redesign of the Virgin America and V-Australia counters is part of ongoing expansion and renovation plans at LAX.
“We’re committed to making forward-looking investments that will modernize and expand one of the world’s busiest airports,” said Executive Director of Los Angeles World Airports Gina Marie Lindsey. “By partnering with Virgin America to create a seamless, next generation gateway for travelers to and from LAX, we’re connecting Virgin’s guests to the airport’s stylish past and its bright and growing future.”

Virgin America has welcomed more than 1.2 million travelers through LAX since its August 2007 launch, and continues to expand its footprint in Los Angeles, most recently with the announcement of service from LAX to Boston Logan International Airport beginning on Feb. 12, 2009.

Virgin America offers innovative amenities that appeal to today’s tech-savvy business and leisure travelers , including power outlets and the touch-screen Red™ entertainment platform at every seat. Red allows guests to control their own experience, with a food menu, 25 on-demand films, seat-to-seat chat, and a play-list of thousands of MP3s, videogames, and live television. Already launched on two aircraft, by the second quarter of 2009 the carrier will be the first U.S. airline to offer in-flight internet service fleetwide .

New Philippine start-up Zest Air took delivery of it's first A320-232 (cn 2141) RP-C8897 on Friday 12/12/2008. The ex jetBlue aircraft N581JB "100 Blue" began it's positioning flight to the Philippines at Marana (MZJ) where it received it's new livery by making a fuel stop at Long Beach Airport (LGB) before continuing on to Hilo, Hawaii (ITO/PHTO). The aircraft arrived in Long Beach at approximatly 1640 PST parking at Toyota's AirFlite facilities. Once fueled the aircraft departed Long Beach at approximately 1810 PST.

Thanks to Dan Brownlee for the above information and heads up that the aircraft was headed to LGB.
Posted by Michael Carter at 8:05 AM No comments: 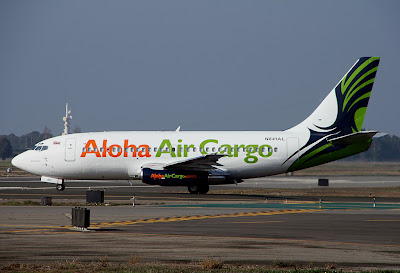 Aloha Air Cargo 737-2X6/ADV(F) N841AL (23123/1042) made a pit stop in Oakland (OAK), California for fuel on December 4th as she made her way home to Hawaii after receiving this striking new livery in Brownsville (BRO), Texas.
(Photo by Mark Durbin)
Posted by Michael Carter at 8:13 PM No comments:

A disabled Miramar-based fighter jet crashed and exploded in flames in a University City-area neighborhood moments after the pilot safely ejected Monday, killing three people on the ground with one other unaccounted for, authorities reported.

The F/A-18D Hornet plunged to the ground near Cather Avenue and Huggins Street, about a mile northwest of Marine Corps Air Station Miramar, just before noon, according to San Diego police and the Federal Aviation Administration.

The pilot, who had been on a training flight over the ocean and was heading toward the military base when the accident occurred, parachuted into an overgrown area near University City High School, landing in a tree. Medics took him to Balboa Naval Hospital for an evaluation.

The crash and resulting blaze destroyed two homes and sent a thick column of black smoke into the sky, according to the San Diego Fire-Rescue Department. Emergency crews found the remains of three people, whose identities were not immediately known, in the scorched rubble of one of the gutted houses. One other resident of that home remained unaccounted for in the mid-afternoon. "My heart goes out to the family of the victims and to the community of University City," Mayor Jerry Sanders said during a briefing near the crash site.

Military officials said some kind of equipment malfunction forced the pilot to eject. "We don't know exactly what was the cause of the problem he was having, and... we will be conducting a thorough safety investigation to find that out," Marine Corps Col. Chris O'Conner told reporters. Several witnesses reported hearing several loud popping sounds -- apparently the ejection mechanisms of the pilot's seat and the unoccupied second seat -- just before the jet went down.

Fire Capt. Randy Strick said crews responding to the three-alarm fire arrived to see "an aircraft engine in the middle of the street." Police shut down several streets in the neighborhood as crews doused the blaze and investigators began cataloguing evidence at the crash scene.
It took firefighters about 30 minutes to extinguish the flames.

Steve Diamond, a retired Navy lieutenant commander who witnessed the crash, said he went to the spot where he saw the pilot parachuting toward earth to see if the serviceman needed any assistance. "He was behind a house, in a tree," Diamond said. "I helped him out. He was in good condition. He had a cell phone and called his command."

In the moments leading up to the crash, the jet was flying "low and slow, approaching from the west, not a normal approach," he said. Diamond, 53, said he and the lieutenant who ejected from the plane discussed what had gone wrong with the craft. Diamond declined to disclose what the pilot said, other than that it involved a mechanical problem.

Cather Avenue resident Nora Bhes described the alarming noises caused by the plane crash. "It sounded like a thunderstorm with a real screech at the end of it," she said. "Then I heard loud pops like gunfire. And that's what I thought it was." Ilene Schroers lives on Huggins Street, about a block from the crash site. She initially thought the jarring sound of the jet hitting the ground "was a trash truck crashing. It was such a big noise." Schroers said she then looked out a window, saw neighbors running and called 911.

Sandy Huffaker, a freelance photographer who lives about a mile from where the aircraft went down, heard an unusual sound and went outside just in time to see pilot eject from the aircraft.
"Just bam -- he shot out about 25 feet in the air," he said.

Mokulele offers daily inter-island service from Honolulu, Kapalua, Kona, Lana‘i, Lihu‘e and Moloka‘i. Beginning in early 2009, Mokulele will also offer service to Kahalui, Maui, and Hilo, Hawai‘i. Under the partnership, Mileage Plan members will earn 500 miles for each segment flown on Mokulele, beginning on Dec. 15. Award redemption on Mokulele will be available in early 2009.

"Alaska Airlines Mileage Plan is one of the best frequent flier programs in the industry, with opportunities to earn and redeem miles on 15 different airline partners," said Bill Boyer, Jr., president/CEO of Mokulele Airlines. "Those who travel frequently know the importance of frequent flier miles. With the addition of Alaska Airlines, our customers in Hawai‘i will have several airline options to help make air travel rewarding and affordable."

"Alaska Airlines prides itself on its ability to provide frequent fliers with some of the best mileage rewards in the world, and we are excited that our members will soon be able to earn and redeem their miles for travel within the islands of Hawai'i," said Gregg Saretsky, executive vice president, flight and marketing for Alaska Airlines. "We're delighted to welcome residents of Hawai'i to the Mileage Plan and invite them to start earning valuable Mileage Plan miles whenever they fly between the islands on Mokulele Airlines."

About Mokulele AirlinesMokulele Airlines is a locally owned and operated inter-island airline based in Kailua-Kona, Hawai‘i. Founded in 1998 as Mokulele Flight Service Inc., it was acquired by current CEO Bill Boyer in 2005. Today, the airline is a scheduled U.S. carrier with commuter services and now jet service operated by Republic Airways. Mokulele also offers volcano tour flights as well as inter-island cargo service. Mokulele Airlines currently has a fleet of two Embraer E170 jets with one arriving in December, a fourth arriving in March and options for two more in summer 2009. Mokulele Airlines has seven 208B Cessna Grand Caravans, including a dedicated freighter, and operates 85 daily departures to seven cities in Hawai‘i.

(Alaska Airlines)
Posted by Michael Carter at 9:20 AM No comments: 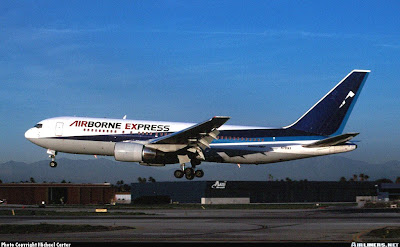 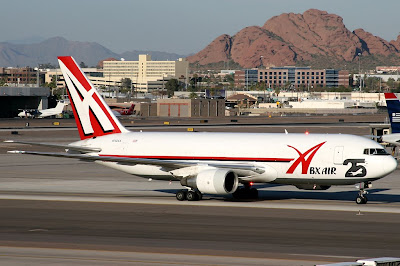 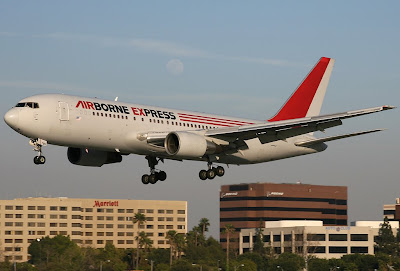 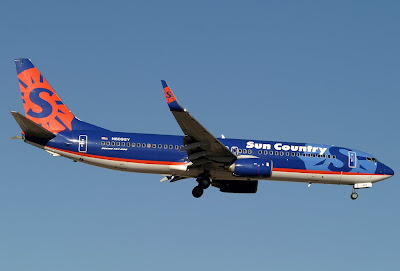 Sun Country 737-8Q8 N809SY (30683/1669) caught
on short final to Rwy 1R at Las Vegas on November 7th.
(Photo by Michael Carter)
Sun Country Airlines received US Bankruptcy Court approval for a line of credit that will allow it to restore employees to full pay and meet other financial obligations. The Minneapolis-based carrier, which is working its way through Chapter 11 restructuring (ATWOnline, Oct. 20), was paying workers just 70% of their salaries. SCA did not reveal the origin of the debtor-in-possession financing, but news reports named Elite Landings, another subsidiary of SCA parent Petters Group Worldwide. 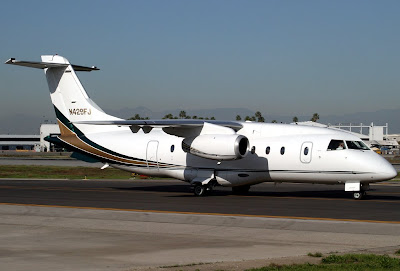 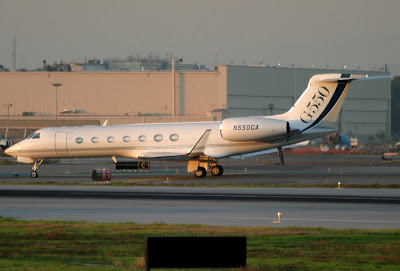 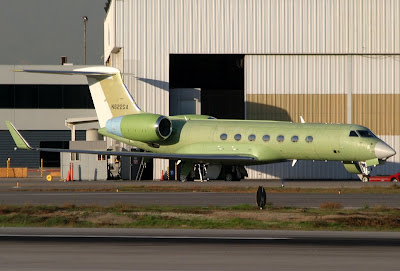 Gulfstream G550 N550GA (cn 5211) has emerged from the paint shop sporting the corporate Gulfstream 550 livery. The company is reported to have made a deal with the aircrafts owner enabling it to use the new G550 as a demostrator aircraft for a year. The undisclosed owner will have the aircraft returned with a new livery and custom interior at a substancially lower cost.
Also at Gulfstreams Long Beach facility, the latest new G550 arrival N622GA (cn 5222) was caught basking in the SoCal sun this afternoon.
Posted by Michael Carter at 6:40 PM No comments: 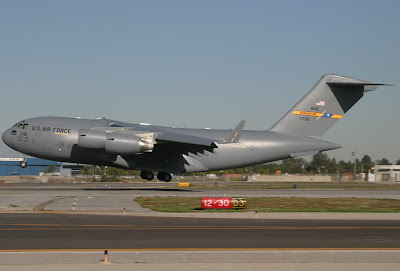