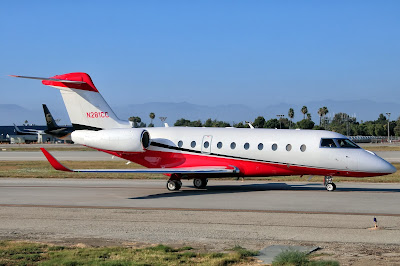 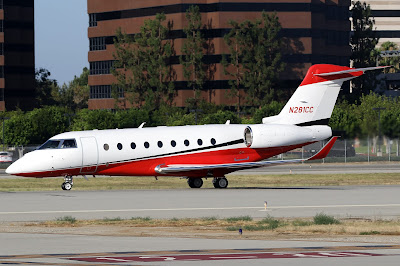 Operated by the Cummins Engine Company Inc., this gorgeous G280 is captured as it taxies to then departs on Rwy 30 at Long Beach Airport (LGB/KLGB) on July 14, 2020.
Posted by Michael Carter at 1:25 AM 2 comments:

A cargo plane crashed into a Texas bay last year after the co-pilot became disoriented and pushed the nose down because he mistakenly thought that the jet was about to stall, investigators said on Tuesday.

The National Transportation Safety Board determined that the co-pilot’s poor training and inability to handle pressure contributed to the crash of Atlas Air Flight 3591. The co-pilot withheld parts of his work history from the air carrier to conceal his troubles at other airlines and was a “train wreck” in training, board members and investigators said during a Tuesday hearing on the crash.

The Boeing 767 was carrying cargo from Miami for Amazon.com and the U.S. Postal Service when it went from a slight climb to a high-speed dive and disintegrated upon slamming into a shallow bay east of Houston. All three people on board, including a pilot hopping a ride in the jump seat, were killed.

The board said Tuesday that the plane was being flown by Conrad Aska, the 44-year-old first officer. Investigators believe that as the plane passed through mild turbulence Aska unintentionally hit a switch that put the plane into a “go-around,” an acceleration maneuver normally done only to abort a landing.

As the plane tipped slightly higher, Aska became disoriented and wrongly believed the plane was about to stall, or lose the ability to stay aloft. He pushed the nose of the plane down, triggering the nosedive, investigators said during the hearing.

The board found that the captain, 60-year-old Ricky Blakely, had failed to intervene to stop the crash.

The final seconds of the flight were captured on grainy footage from a security camera operated by the Chambers County Sheriff’s Office. The plane dropped more than 3000 feet (914 meters) in 30 seconds before smashing into Trinity Bay, 40 miles (64 kilometers) from the intended destination of George Bush Intercontinental Airport.

The board also highlighted past problems in Aska's training, including that he hid his record from Atlas, and criticized the Federal Aviation Administration for being slow to set up a database of pilot records.

The co-pilot's training record showed he acted “impulsively” during training exercises at several previous airlines and had a history of failed check rides, in which an instructor or supervisor watches.

“He had an inability to remain calm during stressful situations," investigator David Lawrence, a pilot, said.

The investigation determined that Aska had hid his record from Atlas by not disclosing he had spent time at two regional airlines. In its findings of probable cause, the safety board faulted the FAA for not fully enacting changes in pilot record reporting that Congress mandated years ago.

An FAA spokesperson said there is a voluntary version of this database. The agency expects to publish a rule that would require air carries share pilot records in January 2021 and will complete the database after that, she said.

“Of critical importance is the need for an improved federal pilot records database to provide airlines with full visibility of pilot history in the hiring process,” Dietrich said in a statement.