Air Force gives new life to the A-10 Warthog 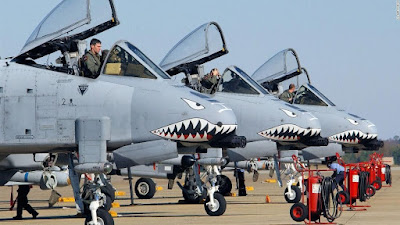 Retirement rumors have swirled around the US military's venerable close-air support aircraft for years, but the battle-tested, 1970's-era airplane will live to fight for at least the foreseeable future, according to the Air Force.

President Donald Trump's first full budget, which was released on Tuesday, outlines plans for the Air Force to maintain its fleet of A-10 Thunderbolts -- commonly known by their nickname the "Warthog" -- along with "Dragon Lady" U-2 spy aircraft despite previous plans to replace both aging platforms in coming years.

"There is not a retirement date for the U-2 in this budget," Maj. Gen. James Martin, the Air Force's deputy assistant secretary for budget, said during a budget briefing at the Pentagon on Tuesday. "We plan to keep that platform well into the future."

The Air Force also confirmed Tuesday that it plans to maintain the majority of its A-10 Warthogs in coming years despite past considerations of divesting the entire fleet.

An Air Force official said the A-10 fleet was being kept indefinitely, but in the future, some A-10 aircraft could be retired as other aircraft become operational.

Senate Armed Services Chairman John McCain, who has worked for years to stop the Air Force's efforts to retire the A-10, said the Pentagon's decision was in part a recognition of the political landscape on Capitol Hill.

"It didn't matter what was in their budget, it wasn't going to be retired," the Arizona Republican said.

Lawmakers have wrestled with how to replace the A-10 for years -- a tall task due to the aircraft's continued proficiency despite making its first flight in 1975.

The Air Force had originally planned for its version of the F-35 Joint Strike Fighter to replace the A-10.

But unlike the multi-role F-35, the A-10 is the only airplane in the Air Force specifically designed for close-air support, a mission that has become urgent in the fight against ISIS, according to Air Force officials.

The A-10 is able to target enemy forces up close without risking friendly fire casualties because the pilots are flying slow enough to visually distinguish between enemy and friendly forces.

But while the first wave of F-35s are currently being deployed for combat, the program's history of delays and cost overruns has caused the Pentagon to consider extending the operational life of the A-10 to meet the demands of the counter-ISIS mission.

Rep. Martha McSally, R-Arizona, a retired Air Force pilot who was the first female fighter pilot to fly in combat, has led the charge in Congress to keep the A-10 in the air and has looked to the new administration to get the Pentagon on her side.

She lobbied Vice President Mike Pence on the issue when he came up to the Hill and she also talked to Trump about the Warthog's capabilities, as well as the culture around personnel recovery and close-air support, according to a House aide.

Trump praised McSally and mentioned her work with the A-10 during an award ceremony for the military service academy football programs in the Rose Garden earlier this month.

The A-10 can carry up to 16,000 pounds of bombs and missiles and is armed with a powerful 30-millimeter, seven-barrel Gatling gun, which can fire depleted uranium bullets at 3,900 rounds per minute.Last year, then-Secretary of Defense Ash Carter said there were plans to defer the A-10's retirement until 2022, at which point it would be replaced by the F-35.

But the Air Force has refrained from giving an exact timetable for the aircraft to be put out to pasture, telling CNN that they will evaluate the way it maintains the A-10 as the years progress.

Capable of climbing to well over 70,000 feet, the U-2 spy plane is also widely considered an important asset in the effort to find and destroy senior ISIS fighters, safe houses and battle positions.

Nicknamed the "Dragon Lady" the U-2 is a Cold War-era plane that has been flying since the 1950s. But the planes have been modernized with new sensors and cameras, making them an important intelligence gathering asset.

The Air Force has extended the operational life of the U-2 indefinitely as well.

There is SHOCKING news in the sports betting industry.

It has been said that every bettor needs to see this,