John Travolta donates his Boeing 707 to HARS in Albion Park 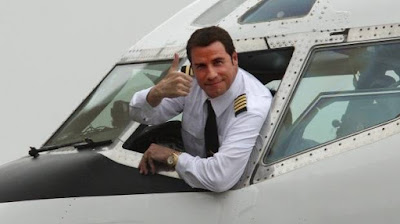 Hollywood actor John Travolta announced on Saturday he will donate his prized Boeing 707 aircraft to the Historical Aircraft Restoration Society.

Travolta, a qualified pilot and Qantas ambassador, hopes to be part of the crew to fly the vintage passenger jet from his Florida home to the HARS aircraft hangar at Illawarra Regional Airport in Albion Park.

“The aircraft currently requires a lot of work to be restored to a safe flying state and having seen first hand the dedication and passion of people at HARS, I have no doubt this beautiful and historical aircraft will be flying again,” Travolta said.

“I am hoping to be part of the crew to fly the aircraft to Australia, supported by well qualified and experienced pilots and engineers.”

HARS president Bob De La Hunty said the aviation museum would send its engineering team to the United States to help prepare the plane for the historic flight.

“The aeroplane’s in pretty good shape, but aeroplanes do need maintenance,” he said.

“The timing of that will be something we negotiate with the maintenance outfit that looks after the president of the United State’s airplane.

“We have to send our engineering team over there, work out the timing and what needs to be done to get it back in the air. It flew last in December.”

Mr De La Hunty confirmed the actor had expressed an interest in flying the jet to the Illawarra.

HARS will work around Travolta’s movie schedule to ensure he can be part of the action.

The Boeing 707 will join the Qantas 747-400 VH-OJA - known as the City of Canberra – as one of the region’s great tourist attractions.

Thousands of spectators were on hand in March 2015 for the arrival of the jumbo jet at its new home at the Illawarra Regional Airport.

It gives me great pleasure to make this exciting historical announcement that my beloved Boeing 707 aircraft has been donated to the Historical Aircraft Restoration society (HARS) based in the town of Albion Park, approximately 90 miles (140 km) south of the city of Sydney in Australia.

As many of you will know, flying is a passion of mine and I am just so grateful to be fortunate enough to count many hours flying such a beautiful aircraft.

The aircraft was originally delivered to Qantas Airways in 1964 and was converted for private use after it finished its life with “The Flying Kangaroo”.

I was honoured to have the 707 repainted in the original Qantas colours when I became the ambassador for the airline, and it’s so fitting that many of the volunteers at HARS are retired Qantas employees.

The aircraft currently requires a lot of work to be restored to a safe flying state and having seen first hand the dedication and passion of people at HARS, I have no doubt this beautiful and historical aircraft will be flying again.

HARS have an impressive track record of restoring historical aircraft and I have personally flown in a Super Constellation that they restored to flying condition from almost nothing.

I am hoping to be part of the crew to fly the aircraft to Australia, supported by well qualified and experienced pilots and engineers.

In making this announcement, I would like to mention the significant support given by the Bendigo Bank Oak Flats and Shellharbour Community Bank Branches who as a local organization, have been very supportive of HARS’ efforts in aircraft restoration.

Thanks must also go to QBE Insurance (Australia) Limited Services for their significant support as well.

I am truly excited by this project and am just so pleased that this beautiful aircraft, for which I obviously have very fond memories, will continue to fly well into the future.
Thank you, John Travolta
Posted by Michael Carter at 6:18 PM