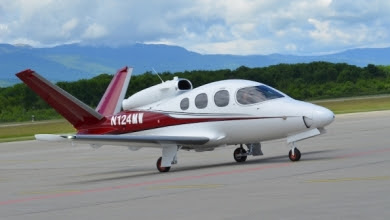 The airplane, still wearing it's U.S. registration, arrived at Eelde Aerodrome, Groningen, Netherlands, this past Wednesday, at the end of a transatlantic flight via Goose Bay, Greenland, and Norway, on delivery to Europe’s largest service center for Cirrus Aircraft, General Enterprises Maintenance.

As many as six more will follow the same path before year-end.

These later aircraft will roll off the line more rapidly, thanks to Cirrus gaining an FAA production certificate for its Duluth, Minnesota, factory, earlier this month. Some 15% of the 600 order backlog is destined for Europe, the company says. Fifty will be built in 2017 and between 75 and 125 in 2018.