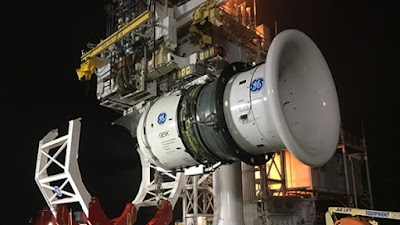 GE Aviation has started the 18-month certification program for the GE9X engine that will exclusively power the Boeing 777X.

GE aims to complete the certification program by the end of 2018. The 777X is slated to enter service in 2020.

The start of the certification program follows more than a year of testing with the GE9X first engine to test (FETT).

“Historically, the first engine to test is not separated by the second engine by a year-plus,” GE9X program general manager Ted Ingling told ATW. “That was by intent that we moved that first engine forward to allow us as a design team to validate the architecture of this new engine, learn, and adapt those learnings into the certification baseline.”


(Aaron Karp - ATWOnline News)
Posted by Michael Carter at 10:15 AM