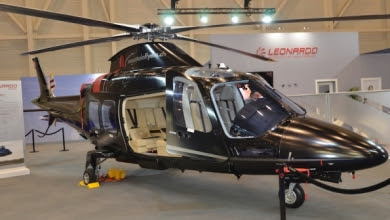 Leonardo is at EBACE to trumpet its claim to a leading position in the global VIP helicopter market with a 50% share in the multiengine segment.

Supporting hardware evidence is in the form of an A109SP GrandNew which, living up to its name, was only entered on the Swiss civil aircraft register on May 11 and delivered to Centaurium Aviation the next day. The all-black HB-ZNK will be operated by Mountainflyers for taxi services from Bern Airport.

This will be Bern’s first twin-engine-helicopter VIP transport service, capable of serving a range of routes across Switzerland and Europe. The aircraft features an exclusive six-seat VIP cabin and anticipates safety-enhancing requirements such as ADS-B Out.

Leonardo reports that approximately 370 helicopters of the Grand and GrandNew series have been ordered by nearly 230 customers in around 40 countries around the world. Derived from the former Agusta A109, the type continues to be the most successful VIP model in the company’s light twin range.

That said, the AW139 intermediate twin, AW169 and AW189, AW101 and forthcoming AW609 tiltrotor are also being offered with VIP and VVIP interiors.

In Switzerland, Leonardo has a fleet of approximately 20 executive helicopters of various types. The firm cites performance, cabin space and comfort, safety, and latest technology for all-weather capabilities, as prized qualities in the local market.

To make helicopter flying more environmentally acceptable, reducing both noise and emissions, for example, the AW169 features a variable-speed main rotor with advanced, new design blades and even an “APU mode” to power main systems such as ECS and entertainment on ground using just one of the two engines – with rotors stopped.