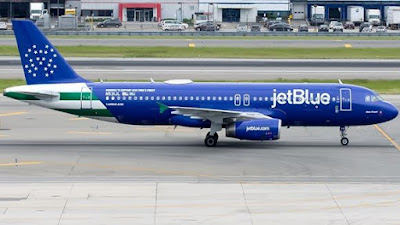 The “Blue Finest” livery features a bright blue fuselage before ending with the NYPD flag across the tail section. A smaller badge and shield will greet fliers by the jet’s forward boarding door.

The flag that was the inspiration for the aircraft’s tail design was adopted by the NYPD in 1919. Among its highlights are a field of 24 white stars, which represent the 23 separate towns and villages that eventually became a part of New York City. The 24th star represents New York City itself.

“As New York’s Hometown Airline, supporting our local public servants including the NYPD is part of our DNA,” Joanna Geraghty, JetBlue’s EVP for customer experience, says in a statement. “Our mission of inspiring humanity is brought to life each day through our crewmembers, many of whom are also former public servants. This mission also lives in the work the NYPD does to keep our communities safe.”

Adding to the poignancy for the carrier, JetBlue estimates up to 15% of its in-flight crewmembers have served in some capacity as public servants in positions ranging from law enforcement to first responders to military service.

“I want to thank everyone at JetBlue for honoring the hardworking men and women of the NYPD with this incredible symbol of partnership and professionalism,” NYPD Commissioner James P. O’Neill said in a statement. "This aircraft, ‘Blue Finest,’ has the perfect name and appearance to represent those who have made it their lives' work to fight crime and keep people safe. It is an impressive interpretation of NYPD hallmarks and will spread our commitment to public safety far beyond New York City.”

JetBlue’s “big reveal” of the aircraft came Monday morning at its hangar at JFK in front of employees, “many of whom previously worked with NYPD and were specially invited to the event.”

Also on hand were "Bobbies" from the British Metropolitan Police Department, who were competing in "plane pull" charity event against teams made up of JetBlue crewmembers and local authorities from the New York Police and Fire departments. The event was to raise funds for childhood cancer research. Also benefiting from the charity event is the J-A-C-K Foundation, a children's cancer research fund established by officers from the British Metropolitan Police Department.

(Ben Mutzabaugh - Today In The Sky / USA Today)
Posted by Michael Carter at 10:48 AM