Got a spare $55 million and a desire to take an in-flight shower with a friend? If so, Embraer is seeking a second customer for the Lineage 1000E to which it has added the extra luxury of a queen-size bed and two-person shower. 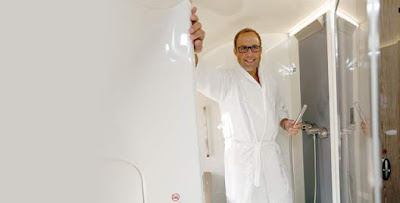 The two-person shower – only one of which is in service, with an unnamed North American owner – is 40% larger than the single shower featured on some other Lineage 1000E business jets. It has a dedicated 30gal water tank – enough for a 40min shower – and a window, because “geographical awareness helps you balance”.

Embraer has borrowed an aircraft equipped with the shower from the factory to showcase it to EBACE visitors on the static display. “Everybody has been wowed by it,” says Beever.

While admitting that describing it as a two-person shower conjures up “exotic” images, Beever says the idea is “not to be racy” but to convey the point that it is more spacious than other onboard showers.