Elvis’ private jet being auctioned after 30 years on a runway in Roswell, New Mexico 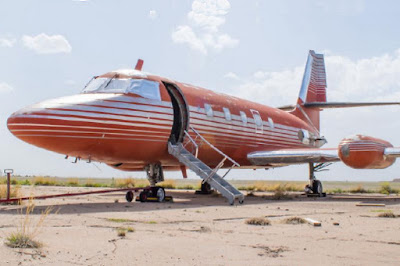 It won’t fit in a garage, but that likely won’t stop Elvis Presley fans from trying to get their hands on one of the largest mementos credited to the King of Rock ‘n’ Roll: His long “lost” private jet.

Presley’s 1962 red Lockheed JetStar will be sold to the highest bidder on May 27. The starting bid is $10,000 and it already has one bidder.

It’s missing its engines, by the way.

GWS Auctions Inc. out of California is orchestrating the action and estimates the plane is worth between $2 million and $3.5 million.

The Web site www.liveauctioneers.com, which is handling the bidding, says the jet has been parked on the tarmac in Roswell, New Mexico, for more that 30 years. “This is the ‘lost’ jet...(It) was very important to Elvis, as he owned it with his beloved father, Vernon,” says the Web site.

Celebrity Insider reported Saturday that many fans of the King are hoping his ex wife, Priscilla Presley, will purchase the jet and place it in a museum or have it moved to Graceland in Memphis, where Elvis died and is buried.

It is currently owned by a private collector, who was not named. Elvis owned other planes, but this is the only one that is not in the procession of the Graceland estate, says a web site for the auction.

GWS says the interior was personally designed by Elvis, including gold-tones with woodwork, red shag carpet and red velvet seats. It’s one of only 204 such aircraft manufactured between 1957 and 1978, in a private project between JetStar and Lockheed, says GWS.

The jet is one of 315 lots included in an auction of celebrity memorabilia. For details, visit www.TheCelebAuction.com or Liveauctioneers.com.

Teds Woodworking has more than 16,000 woodworking blueprints with STEP BY STEP instructions, drawings and blueprints to make each project very easy!!!