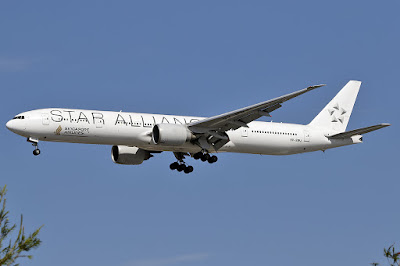 Singapore Airlines has called on its Boeing pilots to use higher thrust and rotation speed for take-off in gusty wind and crosswind conditions, following a 777-300 tail-strike incident at Melbourne airport on 9 October 2016.

In its final report into the incident, the Australian Transport Safety Bureau cited that the aircraft, registered 9V-SYG, was operating from Melbourne to Singapore with two flight crew, 16 cabin crew and 261 passengers. There were no reports of injuries.

The captain was operating as pilot flying (PF) and the first officer operating as pilot monitoring (PM). The first officer had earlier commented to the captain that while on the apron ‘they had difficulty walking straight due to the strong wind’. The automatic terminal information service (ATIS) had advised that wind conditions at Melbourne Airport were 325°at 25kt, gusting to a maximum of 45kt, and turbulence had been reported in the control zone.

During rotation, the PM observed a downward speed trend, below Vr and called ‘SPEED’. The PF did not recall hearing this call-out. The PF continued rotation, however, the aircraft did not achieve lift-off at the manufacturer’s stated lift-off attitude of 7 degrees. Flight data analysis shows the aircraft became airborne at 10.7 degrees pitch attitude.

After take-off, air traffic control contacted the flight crew alerting them of a ‘possible tail strike’. However, no tail strike caution message was displayed on the engine indication and crew alerting system. The flight crew then carried out the unannounced tail strike non-normal checklist and determined the aircraft structural integrity was intact. The cabin crew stationed at the rear of the aircraft had however heard a 'loud bang' during take-off.

With the aircraft pressurization system indicating no abnormalities the captain made the decision to continue to Singapore.

Investigations later found contact marks on the runway, consistent with a tail skid contact. No metallic debris was observed on the runway. Air traffic control advised the flight crew that ‘only superficial concrete debris was found’ during the runway inspection.

An inspection of the aircraft in Singapore found no damage to the fuselage. Damage was evident to the tail skid system with indications of a scraped tail shoe, compression of the crushable cartridge and one indicator pin extended.