787-10 flies to Seattle for start of yearlong flight testing

The first Boeing 787-10 Dreamlinerflew from South Carolina to Boeing Field on Thursday to begin flight testing. 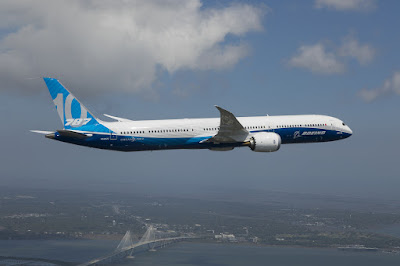 The plane, built at Boeing’s North Charleston assembly plant, was rolled out in February with President Donald Trump attending the ceremony. It made its roughly five-hour first flight on March 31.

With Boeing’s flight test pilots, mechanics and engineers based here, the flight test program, which is projected to last about a year, will be centered at Boeing Field.

Unlike the two earlier versions of the 787, which are assembled in Everett as well, the 787-10 is built only in South Carolina.

Its mid-fuselage section, assembled in North Charleston, is too long to fit into the specialized Dreamlifter cargo plane used to ferry 787 sections to Everett.