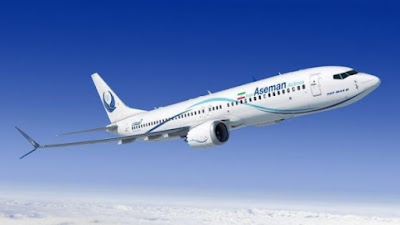 Boeing has confirmed Iran Aseman Airlines signed a memorandum of agreement (MOA) for 30 737 MAX aircraft, with a list price value of $3 billion. The deal includes purchase rights for 30 additional 737 MAXs.

Deliveries are scheduled to start in 2022.

Boeing said it negotiated the MOA under authorizations from the US government following a determination that Iran had met its obligations under the nuclear accord signed in 2015. Boeing said it will look to the Office of Foreign Assets Control for approval to perform under this transaction.

In January this year, Iran Air took delivery of its first Airbus A321, which was part of historic order for 100 Airbus aircraft—46 A320-family single-aisle models, plus 54 twin-aisles consisting of a mix of A330s and A350s—signed in 2016. In March, the Iranian flag carrier received its first widebody A330-200 from that order.


(Linda Blachly - ATWOnline News)
Posted by Michael Carter at 8:44 AM

eToro is the #1 forex broker for new and established traders.