A Jumbo Jet of Your Very Own 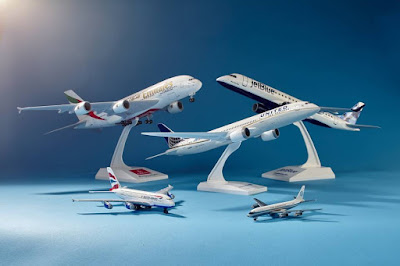 Refrigerator magnets are for amateurs. For many seasoned travelers, the collectibles of choice are scaled-down versions of the planes they’ve flown. Here’s how to build your own miniature fleet

United Airlines may be retiring its aging Boeing 747s, but the iconic jet is not entirely obsolete. The carrier will sell you a sleek new die-cast model of the jumbo jet for $55 at one of its airport stores in Newark, N.J., or Houston.

Model planes have grown with the industry they celebrate and promote, starting with the first pull toys made to (bumpily) honor Lindbergh’s 1927 solo flight to Paris. New Jersey-based Daron Worldwide Trading Inc., a leading purveyor of aircraft collectibles, stocks some 8,000 models (representing about 100 airlines), from the workaday American Airlines 737 to the less-predictable Uzbekistan Airways Tupolev Tu-154.

Made of metal, hard plastic or resin, the geeky gewgaws conform to precise scale measurements, with paint jobs that mirror the real thing. “The road warriors tend to buy what they fly,” said Eugene McKeown, Daron’s vice president of sales, who noted that most collectors either work in the industry or are frequent fliers. The hottest sellers? Widebody jetliners like the Dreamliner (Boeing’s 787) and Airbus ’s superjumbo, A380, whose mini versions can cost up to $400, more than the price of some airline tickets.

Thriftier aviation buffs can find a fleet of options for under $60 on Daron’s airplaneshop.com, which leaves plenty of cash for an actual flight.

Find out how to get free flights using Travel Hacking.