Hawaiian refurbishes A330 cabins as it prepares for A321neos 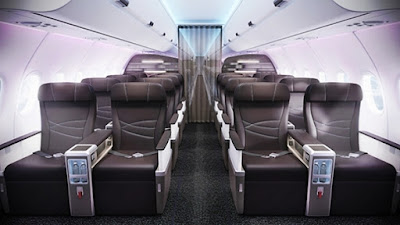 Hawaiian Airlines is revamping cabin interiors across the bulk of its fleet with the arrival of its first Airbus A321neos expected in the fourth quarter and a retrofit of its A330s well underway.

“A little under half our A330 fleet has been retrofitted with the new cabins,” Hawaiian SVP-marketing Avi Mannis said. The new A330 cabins include 18 flat beds in first class, 68 premium economy seats, up from 40 and a new total of 278 seats compared with 297 previously.

The airline expects to receive three A321neos in the fourth quarter of 2017 and bring them into service early in 2018. Deliveries were originally scheduled to begin in July, but production problems with the Pratt & Whitney geared turbofan (GTF) engines have caused delays. Hawaiian wants to use the A321neos on routes from the west of the US to Hawaii, Mannis said.

The design of the new cabins includes elements that connect them to Hawaii, such as abstracted patterns of the islands on its economy seat covers, and wave-like stitching. “It’s hospitality-inspired, with threads of Hawaii. There’s a design language consistency between all Hawaiian Airlines products,” said Tim Manson, Design Director of JPA Design, which worked with Hawaiian to design the new cabins. He added that the carrier’s leisure focus means the design team opted for warm tones rather than greys and blues that would conjure up a more corporate image.

They were speaking on the sidelines of the Passenger Experience Conference, part of the annual Aircraft Interiors Expo.

JPA Design and Hawaiian worked to give passengers a long-haul style experience on a narrow-body aircraft, including installing two lavatories mid-way through the A321neo cabin to allow for passengers to move around during inflight meal service, Manson said.

Eight more of the aircraft should enter the Hawaiian fleet in 2018, six in 2019 and one more in 2020, completing the order of 18 aircraft it has in place, Mannis said. By that stage the airline should have phased out its Boeing 767s.

Hawaiian is looking at adding connectivity to its fleet but “we have not yet settled on a service that provides enough bandwidth across the Pacific,” Mannis said. “We’re not convinced we have found exactly the right thing. Being a leisure-focused carrier gives Hawaiian “a bit of a reprieve,” on connectivity, he added.