Boeing 737, which ‘took the aviation world by storm,’ marks 50 years of flight 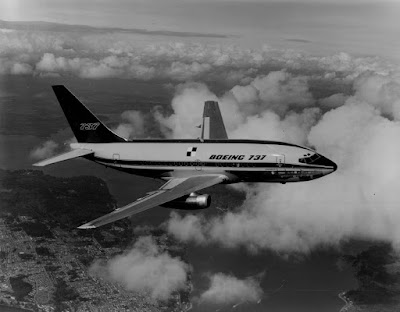 The first flight of the Boeing 737-100 occurred April 9, 1967. With pilots Brien Wygle and Lew Wallick at the controls, the airplane took off from Boeing Field in Seattle and flew for 2-1/2 hours before landing at Paine Field in Everett, Wash. The 737 was designed as a logical short-range airplane to complement larger 707 and 727 jetliners. The first 737-100 was delivered to Lufthansa Dec. 28, 1967, and began commercial revenue service on Feb. 10 of the following year.
(Boeing)

On Sunday April 9, the Boeing 737 celebrates the 50th anniversary of its first flight, and Seattle’s Museum of Flight is hosting a birthday bash.

The first flight of Boeing’s original 737 took place 50 years ago on Sunday, and Seattle’s Museum of Flight will mark the anniversary with a celebration that’s open to the public for the price of admission.

The occasion comes just weeks before the first delivery of the newest version of that jet, the Boeing 737 MAX.

Brien Wygle, the pilot who commanded that first flight on April 9, 1967, and who two years later was co-pilot on the first flight of the 747 jumbo jet, will participate in a panel discussion at noon in the museum theater.

“Fifty years ago we had no idea,” Wygle, 92, said in an interview this week. “We were hoping to eventually sell enough to break even.”

As it turned out, the longevity and success of the 737 proved astounding. Boeing as of last month had delivered 9,448 of the single-aisle twinjets, with 4,506 more still on order.

And with the delivery of the first MAX coming soon, Boeing plans to ramp up production in Renton later this year to 47 jets per month and up to 52 per month next year.

“The 737 took the aviation world by storm and has been improved steadily since,” Wygle said. “It obviously filled an incredible need.”

A new 737 MAX will be on display in the museum parking lot Sunday, with a demonstration flight tentatively scheduled for 1:15 p.m. — the exact time the prototype 737 first took off.

And the original from 50 years ago will also be there for its birthday bash.

That plane was used as a Boeing test aircraft until 1973, then sold to NASA for use as a flying research laboratory.

NASA donated the plane to the Museum of Flight in 1997, and during six years in storage at Moses Lake it was lovingly restored by a team led by former 737 engineer Bob Bogash.

Bogash likes to say he’s been involved with the 737 “from womb to tomb.”

He worked as an engineer building the first airplane, then on the flight tests and later as a field rep for 10 years, traveling the world and helping airlines introduce the airplane. And he was on board its final flight in September 2003 for the hop to Boeing Field and its final resting place at the museum.

He said the 737 changed aviation, bringing jet transport to tiny airports all over the world.

“Small airlines flew it to remote places,” Bogash said. “We flew off unpaved runways in the Canadian North. Many of those airlines had never had a new airplane before and never had a jet airplane.”

The 737 also transformed the economics of domestic flying in the U.S.

Its swift turnaround times, fuel efficiency and ability to operate from small airports produced the concept of low-fare carriers and brought air travel to the masses.

Today, Southwest Airlines flies a fleet of more than 700 of the jets.

On Sunday, a reception from 2-4 p.m. will be in the museum’s Aviation Pavilion, next to the restored 737 No. 1, which still sports its NASA livery.


(Dominic Gates - The Seattle Times)
Posted by Michael Carter at 10:42 AM

If you want your ex-girlfriend or ex-boyfriend to come crawling back to you on their knees (no matter why you broke up) you have to watch this video
right away...

(VIDEO) Win your ex back with TEXT messages?