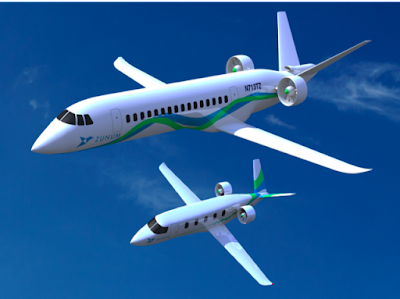 On Wednesday, the hybrid electric-aircraft startup Zunum Aero announced that it had received an investment from Boeing and JetBlue.

"I consider us very fortunate to have backers like JetBlue and Boeing," Zunum Aero founder and CEO Ashish Kumar told Business Insider. "We have been engaged with both companies for about a year, and both are as passionate as we are in this opportunity to reinvent regional air travel."

JetBlue's investment in the three-year-old startup was made through its Silicon Valley-based venture-capital fund led by Bonny Simi, the Olympian turned pilot turned airline executive. The amount was undisclosed.

"At JetBlue Technology Ventures, our goal is to be part of a disruptive force rather than the one being disrupted, and we seek new technologies that look to change the game," Simi said in a statement. "As a company that is also deeply committed to innovation in sustainable travel, we believe that Zunum and its quiet, environmentally friendly aircraft will light up a vast network of underutilized airports and reinvent regional travel."

Zunum's proposed regional aircraft would hold 10 to 50 passengers with a range of up to 1,000 miles. According to Kumar — whose résumé includes leadership stints at Dell, Google, and McKinsey and a Ph.D. from Cornell in mechanical and aerospace engineering — the jet will be powered by a battery first series hybrid propulsion system. This calls for the aircraft to run primarily on battery power with an aviation diesel or turbine range-extending power generator on call if necessary.

Since the aircraft isn't expected to fly until the next decade and will have a service life of roughly 20 years, Zunum is designing its aircraft to be "future-proof" — meaning the aircraft will be designed in a way that will allow it to adopt new technology. For instance, the aircraft will initially feature hybrid propulsion designed to deliver 80% lower emissions than comparable traditional aircraft. But with advancements in battery technology, the range-extending internal combustion engine can be replaced with an extra battery pack, thereby lowering emissions to zero, Kumar said.

In addition, Zunum's propulsor technology is expected to reduce the aircraft's noise emissions by 75% — important for operations into airports with stern noise restrictions.

In recent years, many carriers have moved away from operating small 50-seat regional jets in favor larger aircraft that offer lower unit costs. Zunum says that by cutting out the need for large volumes of jet fuel, its aircraft can cut an airline's operating costs by 40% to 80% a flight. Even though airlines will have to swap out battery packs once or twice a year, Kumar believes his electric jets can deliver better unit costs than the latest jumbo jets from Airbus and Boeing.

In addition, the Zunum jets are designed for operation out of small general aviation or regional airports. This cuts down on passenger commute times, time spent in long security lines, and the need to connect through a larger hub. In fact, Kumar says that by taking advantage of general aviation airports, the planes could deliver door-to-door speeds that are two to four times as fast as those of highways, high-speed rail, or conventional aircraft.

According to Simi, JetBlue Technology Ventures, which launched early last year, targets investments that it believes can help JetBlue function better as an airline or provide its passengers with a better experience.

With Zunum, it may have found an investment that can do both.

Oddly enough, however, JetBlue operates a fleet made up entirely of Airbus and Embraer aircraft. If Zunum Aero works out, it may finally be time for JetBlue to acquire aircraft with Boeing's fingerprints on it.

(Benjamin Zhang - Business Insider)
Posted by Michael Carter at 7:48 AM

If you want your ex-girlfriend or ex-boyfriend to come crawling back to you on their knees (even if they're dating somebody else now) you got to watch this video
right away...

(VIDEO) Text Your Ex Back?

Find out how to book international flights for $100 instead of $1,000 with TRAVEL HACKING.