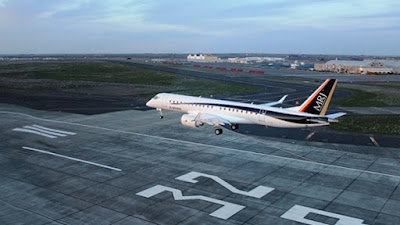 Since the MRJ90’s first delivery to All Nippon Airways (ANA) was delayed again in January—pushed to mid-2020 from mid-2018—Mitsubishi Aircraft has been evaluating how many additional flight test aircraft and flight test hours will be necessary. The delay was necessitated by a design change—the rerouting of wire harnesses and the relocation of some components in the avionics bay—and at least one additional, newly produced MRJ90 incorporating those changes will have to conduct some flight testing in order for the aircraft to gain certification.

The program originally called for 2,500 hr. of flight testing with five MRJ90s, with four doing most of the flight testing in the US. “We are now taking a close look at our flight test program, reflecting the recent change and approximately how much time will be needed or which aircraft will be used, including how many additional flight test aircraft are required to obtain type certification,” a Mitsubishi Aircraft spokesperson told ATW.


(Aaron Karp - ATWOnline News)
Posted by Michael Carter at 10:07 AM