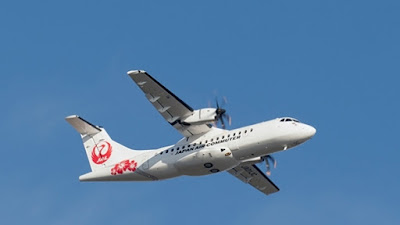 The aircraft then performed three flights: from Yakushima to Kagoshima, from Kagoshima to Okinoerabu, and back to Kagoshima.

Japan is preparing for a huge influx of tourists. The Japanese government hopes to welcome 40 million visitors by 2020.

The carrier ordered eight of the type, plus one option and 14 purchase rights, at the 2015 Paris Air Show. The remaining aircraft will be delivered over the next three years, according to ATR.

The new ATRs will operate on connections from and to small islands and communities across the country.


(Linda Blachly - ATWOnline News)
Posted by Michael Carter at 10:38 AM