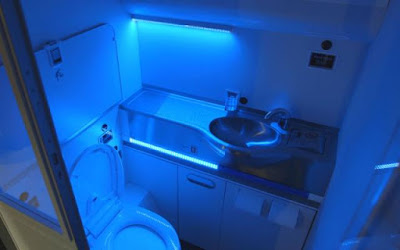 In the future, you might not have to desperately avoid using the germ-filled airplane bathrooms on long-haul flights. Boeing has built a prototype of a self-cleaning lavatory that disinfects after every use-which, paired with hands-free features, would make using the restroom in-flight will be considerably less gross.

Far ultraviolet light is the key to this Clean Lavatory concept. Boeing explains in a press release that its UV lights are positioned throughout the restroom and will kill 99.99% of bacteria and pathogens on all surfaces within a mere three seconds.

While Boeing says this particular type of light isn’t harmful to humans, the cleaning system is designed only to turn on when the bathroom door is closed and unoccupied. It is also rigged to automatically lift the toilet seat during cleaning so that this, too, can be germ-free in three seconds flat.

That kind of automation can be found throughout the rest of this self-cleaning bathroom prototype, too. Boeing’s bathroom uses features like hands-free soap dispensers, trash bins, hand dryers, and that automatically lifting toilet seat and lid. The faucet is also hands-free, as well as outfitted with another UV light to ensure the purity of the water you might use to brush your teeth or wash your face. Boeing says its engineers are also researching a hands-free door latch and a vacuum-vent system.

Though some of these hands-free features are already implemented on aircraft, it’s going to be a while before the self-cleaning lavatory makes it into the air. A Boeing spokesman tells Travel + Leisure that there’s no timeline for putting this design on aircraft since the company has only just finished the prototype. But, he said, “We are moving forward with the design and development of the concept.” The Clean Lavatory is also one of the top three finalists for a Crystal Cabin Award, an international aircraft design innovation award whose winners were announced on April 5.

(Amy McKeever - Travel+Leisure)
Posted by Michael Carter at 10:52 AM