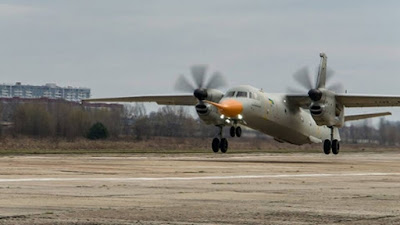 The aircraft, which was rolled out in Kyiv at the end of December 2016, is a modernized version of the Soviet-built An-32 developed in the 1970s.

The An-132D is intended to operate on short- and medium-haul routes, the manufacturer said in a statement. “The new aircraft will perform a variety of tasks, such as the transportation of raw materials, mail and other cargo, including bulk cargo […] and light self-propelled and non-self-propelled vehicles weighing up to 9.2 tonnes. The aircraft will also be deployed for emergencies, including civilian and casualty evacuation from disaster areas and airdropping paratroop rescue teams,” the statement added.

The An-132 program is being developed following a contract with Тaqnia Aeronautics Co. and King Abdulaziz City for Science and Technology, both of Saudi Arabia, in May 2015. The deal includes the transfer of “aviation industry technology” to Saudi Arabia, according to a May 2015 statement from Antonov. In February 2016, both sides agreed to organize the assembly of An-132 in Saudi Arabia.


(Polina Montag-Girmes - ATWOnline News)
Posted by Michael Carter at 8:35 AM