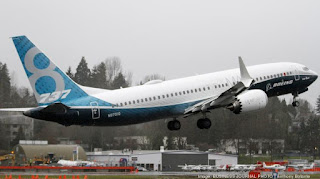 
Boeing’s first 737 Max took off from Renton Field Friday, an important step for the company’s most sought-after aircraft.
The sky was dark and murky, and Boeing moved the takeoff up from the originally scheduled 10 a.m. time to get ahead of the worsening Seattle-area weather.
The jet’s twin engines spun up with an audible whine, and the plane accelerated to the north down the wet runway, then lifted off over Lake Washington.
The successful takeoff – after what has been a smooth and on-schedule journey to production – has vindicated the Boeing’s efforts to prove that its delays with the 787 were an anomaly.
The new Boeing 737 Max, primarily an upgrade with new engines, has sold more before first delivery of any Boeing aircraft, with 3,072 on order at the time of takeoff. The first airplane, which took off Friday, will eventually be delivered to Southwest Airlines as launch customer.
Boeing is ramping up 737 production at the Renton plant to 57 planes per month to keep up with the incredible demand for the planes. Of the current 737 backlog, 70 percent are for the new re-engined 737 Max.
Thousands of employees from the adjacent Boeing Renton assembly plant, where the Max is built, were lined along the west edge of the airfield for an event that attracted journalists from around the nation.
VIPs, including Boeing Commercial Airplanes CEO Ray Conner, were in a nearby tent.
The airplane, with white blue and white Boeing 737 Max colors, was a mid-sized 737 Max 8.
(Steve Wilhelm - Puget Sound Business Journal)
Posted by Michael Carter at 12:23 PM