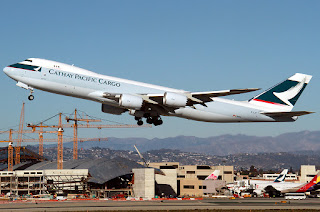 
CEO Dennis Muilenburg laid out the Boeing strategy for the struggling 747 jet on Wednesday.
Boeing announced last week that the company is reducing 747-8 production to a new low as it copes with the fact that it has just 20 of the four-engine jets on order. Of those, only seven are freighters.
On Wednesday Muilenburg faced questions about that rate cut and whether whether it’s economically viable to run the Everett assembly line at one aircraft every two months during the company’s fourth-quarter conference call.
“That is a sustainable rate position for that line to bridge us to 2019 replacement cycle,” Muilenburg said. About 45 percent of the current 747 freighters in use will need to be replaced by 2019, he said.
That said, even at six planes a year, the company doesn’t have enough orders to keep the production line breathing until 2019.
“We’re watching it closely. Between this time frame and 2019, we obviously have got to get orders during that period,” he said. “We have a robust pipeline the team is working on, obviously we’re staying with it very closely.”
The market is more dubious about this and other long-term Boeing prospects. Boeing stock plunged nearly 9 percent Wednesday, to a two-year low of $116.58 at market close.
Muilenburg's jumbo jet plan was specific and he argued that 240 large airborne freighters now flying will be over 20 years old by 2019 and ready for replacement.Several things are in Boeing’s favor for this long wait.
One is that Boeing has nothing else it needs to make room for in the western end of the Boeing Everett factory where workers put together 747s.  This means that the financial cost is relatively low compared to a situation where the space could be used for some other production.
In addition, the 747-8F has unique qualities that Airbus can’t match. The Boeing plane can carry 138 tons of cargo, and it can load large objects, such as vehicles, through the nose door. Airbus’ comparable A380, with its two decks, is so ill-suited to cargo that the company doesn’t even offer a cargo option.
“The 747 is a niche market but an important niche market, and one that we think that is sustainable,” Muilenburg said. “This is a great airplane in a tough cargo market. We expect that to recover and we have a perfect asset to align to that recovery.”
(Steve Wilhelm - Puget Sound Business Journal)
Posted by Michael Carter at 4:43 PM