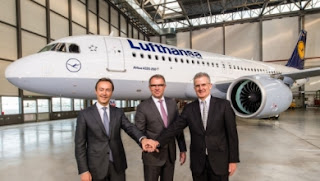 The handover to Lufthansa, which became the launch operator after a late switch with Qatar Airways, occurred without prior announcement or the carefully planned ceremonies typically associated with a new aircraft first delivery.

Lufthansa plans to place the aircraft into service on the Frankfurt-Hamburg route Jan. 24. Airbus president and CEO Fabrice Brégier said earlier this month at a media briefing in Paris that the delivery slip was related to documentation.

Lufthansa chairman and CEO Carsten Spohr said at the Jan. 20 handover ceremony that the “A320neo is by far the most efficient and most silent aircraft on short- and medium-haul routes.” Lufthansa Group has 116 A320neo family aircraft on order.

“Handing over the first A320neo to a world’s leading airline and long standing Airbus customer, Lufthansa, is a truly great day for everyone at Airbus,” Brégier said at the handover ceremony. “This occasion marks a new step forward to delivering on our promises and meeting our industry’s goal for sustainable aviation.”

The Pratt & Whitney PW1100G-powered A320neo was certified in November, but in December Qatar stepped back as the planned first operator because of engine-related operational restrictions.

“Pratt is working on hardware changes and a software update for the PW1100G. Until those changes are made, the engine has to idle for three minutes following startup before it can taxi under its own power,” Brégier said at the Jan. 13 Paris press conference.

“As this is not a brand new aircraft, customers expect the same level of maturity as their [current generation A320] aircraft; they expect it to fly 100% of the time with no problems at all. This is a new engine, a new generation. Technically, it was extremely difficult to develop and produce, so we can’t expect everything to be perfect from day one.”

The A320neo is slated to deliver 15% fuel-savings over the A320ceo, increasing to 20% by 2020.  CFM International’s LEAP-1A is also an engine option for the A320neo and will power later deliveries.

Qatar is now slated to become the second A320neo operator, followed by Indian low-cost carrier Indigo. Airbus is expected to produce 50 A320neo family aircraft a month by early 2017, rising to 60-63 by mid-2019.

“By 2019, we will be able to shift [A320 production] entirely to neos, but that doesn’t mean we will do it because we will still have customers who want additional ceos. Our goal, by mid-2019, is to be able to produce 60 A320neos per month,” Brégier said.