Failure To Launch: The Legacy of the McDonnell Douglas MD-12 Program 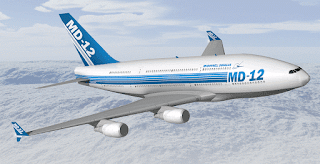 Was the proposed MD-12 Jumbo way ahead of its time or just a ‘Hail Mary’ attempt to keep airlines interested in an ailing company?

Although certainly not as majestic as the 747, the MD-12 would have looked much like the A380 should have looked. Without that hideous nose and a more streamlined body, the MD-12 could have actually been an attractive giant that would have given the Queen of the Skies a run for her money. Some uncharitably say they never really intended to build it at all.

Unveiled in April 1992, by a financially ailing McDonnell Douglas, they also announced first delivery of the 511 passenger, four-engine, full double-decker would be just five years. Officially it was a strategic move to leap-frog Boeing’s 747-400 and the Airbus 380 – Boeing had been exploring an all new, double-deck, four engine, airliner seating over 500 which was uncreatively named, the NLA – “New Large Aircraft.”

The press seemed to love the MD-12, but skeptics said it was just a ploy to get Boeing to pay more for the company.

At the time McDonnell Douglas was very sick financially, creaking under tremendous debt, and this project, although conservative in its design, would need lots of cash the company just didn’t have.

But it was never to be.

Hindsight is 20/20. The market has proven barely large enough to support the A380 and the late-to-the-party 747-8. Both aircraft are still struggling to gain orders today.

Other paper jumbos like the Sukhoi KR-860 (SKD-717) (which by the way, had it been built, would have been the world’s largest, widest, and heaviest airliner, beating the world’s current heavy-weight champion, the AN-225 by 50 tons of max weight) never got off the drawing board. The MD-12 would remain only a concept as one of aviation’s fallen flags.

What happened? Why did a struggling McDonnell Douglas even propose such a bold aircraft? Let’s explore.

Born Out Of A Failing MD-11 Program

Ironically initial concept for the MD-12 had been smaller, a three-engine derivative of its MD-11 which itself wasn’t attract sufficient orders.

This idea morphed into the four engine, two pilot MD-12 with huge wingspan of over 200 feet, a fuselage 31 feet longer than the current MD11 and range of 8320 nautical miles. 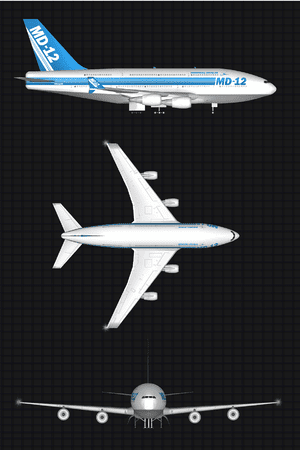 Remember the scramble as airport built new gates to accommodate the A380 when it finally rolled out? The A380-800 has a wingspan of 261.6 feet. The MD-12’s 213 foot wingspan would have been comfortably slipped into the existing 747 airport gates. The current generation 747-400 has wingspan of 211 feet 5 inches.

McDonnell Douglas went as far as putting together a new company with a consortium of Taiwanese companies to build much of the MD-12, although final assembly was probably to have been in the US.

In the end the MD-12 would go down, not just as the first fully double decked commercial jumbo never to materialize, but also as the last new commercial aircraft designed by McDonnell Douglas before the company was sucked into Boeing in a US $13 billion stock swap in August of 1997.

The MD-12 Legacy Survives (Sort of)

The MD-12 program wasn’t a complete bust. Twenty five years later, you can still find reminders of the MD-12.

﻿
Boeing’s AT Winglet that will be featured on the new 737MAX.

Boeing is now busily stirring vestiges of the MD-12 design into the wing of the next version 777 with folding wings and the advanced 737 MAX winglet, the “dual feather.”

We can’t help but wonder if those two innovations on modern airliners were first seeded in the minds of ex-MDC engineers from the failed jumbo program. The engines that would have hung on MD-12’s, General Electric’s CF6-80C2 high-bypass turbofans, later powered versions of the 747, 767 and A330.

And in one last irony, a number of those airlines interested in the MD-12 ultimately became customers for the ugly A380.


(Bransom Bean - Avgeekery)
Posted by Michael Carter at 10:19 AM