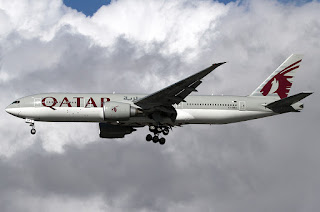 The new route features the airline’s landmark Boeing 777-2DZ(LR) and represents Qatar Airways' first passenger service to the West Coast of the United States. The expansion to LAX is the first of three new US destinations planned for 2016, along with Boston (BOS/KBOS) on March 16th and Atlanta (ATL/KATL) on June 1st.

“We are honored to bring our award-winning service to Los Angeles,” said Qatar Airways Group Chief Executive, His Excellency Mr. Akbar Al Baker. “This great city embodies the glamour and sophistication that gave rise to the ’jet set’ lifestyle, when travel truly started to be part of our life experience. It is only fitting that we bring the world’s best airline experience to the people of Los Angeles.”

The first arrival to Los Angeles was recognized with a special gate ceremony, celebrating the passengers on the historic flight. The airline will officially celebrate the new Los Angeles route on January 12th, when Mr. Al Baker will host a press conference and a star-studded VIP gala.

“Los Angeles and Doha have much in common,” continued Mr. Al Baker. “As passionate homes for sport, fashion, art and world-class entertainment, this new Qatar Airways service forms a bridge spanning continents and cultures, which will further strengthen our cultural and commercial bonds.”

The LAX launch comes as Qatar Airways continues to expand operations in the United States and around the world. In addition to new launches in Boston and Atlanta, the airline is enhancing existing services along its successful US routes. On December 8th, Qatar Airways brought the state-of-the-art Airbus A350, the “airliner of the next decade,” to American shores for the first time.

The airline commenced a regularly-scheduled daily A350 service on January 1st to Philadelphia, and Qatar Airways will also begin a A350 service along a second route between New York and Doha in April.