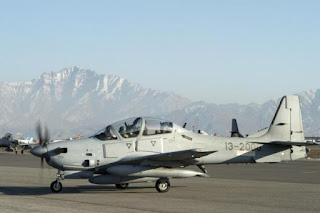 An initial batch of A-29 light attack aircraft from the United States has been received by the Afghan Air Force.

The first four A-29 Super Tucano attack/training aircraft for the Afghan Air Force has been delivered to the country.

The Super Tucano is manufactured in the United States by Brazil's Embraer, which partnered with Sierra Nevada Corporation for a $427 million contract from the U.S. Air Force for 20 of the planes.

The U.S. Air Force said eight Afghan combat-ready attack pilots and a handful of maintainers graduated last month from training at Moody Air Force Base in Georgia and are now back in Afghanistan to operate the aircraft.

More than 20 others are be trained in the United States over the next three years.

"The A-29 program has been an integral part of the U.S. government's overall 'Building Partnership Capacity' efforts around the world and immediately supports the development of an indigenous air force in Afghanistan," said USAF Brig. Gen. Christopher Craige, commanding general at Train, Advise, Assist Command-Air.

"This rapidly developed program for Afghanistan is unique for the A-29 development because this is the first time USAF pilots and maintainers have been trained as instructors to conduct training for Afghan students in the United States."

The A-29 is a turboprop aircraft with a maximum speed of 367 miles per hour and a combat range of radius of 342 miles. It can carry a variety of bombs and missiles for ground support missions.

"It can fly at low speeds and low altitudes, is easy to fly, and provides exceptionally accurate weapons delivery," Craige said. "It is currently in service with 10 different air forces around the world."