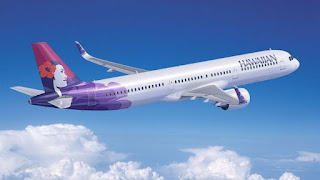 The president and CEO of Hawaiian Airlines says more flights could be headed to Maui over the next few years as the company expands its fleet and operations.

Mark Dunkerley spoke at a Maui luncheon on Monday and outlined what future developments for the company could mean for the island, Maui News reported.

Hawaiian Airlines will receive its first , which is "slightly smaller than our wide-bodies," next year that will allow the company to service nonstop flights between the Neighbor Islands and new routes in the smaller mainland markets.

In 2013, Hawaiian Airlines announced it had entered into an agreement with Airbus to acquire 16 new A321neo aircraft between 2017 and 2020, with rights to purchase an additional nine aircraft. The order has a combined value of roughly $2.8 billion.

"It's going to take a little bit of time until we get enough of (these aircraft) for Maui to really experience the difference, but as we look to the future, we think Maui's going to be one of the main beneficiaries of this substantial new investment in aircraft that we've made," Dunkerley said.

He also announced Monday that , the company's commuter airline, would be adding a twice-daily route from to Honolulu.

Hawaiian Airlines is waiting for the state to install a new set of precision approach path indicator lights at the Kapalua airport. The would then test the lighting during one of its unscheduled trips to Hawaii made twice a year.

"It could be up to six months, I guess, waiting for the FAA, or it could be the next week," said Dunkerley. "It just takes a lot of time to get some of these basic construction things done."

As Hawaiian expands its flight service, Dunkerley said, the company is trying to relieve some of the pressure on its Honolulu hub by continuing to invest in Maui.


(USA Today / Today in the Sky / The Associated Press)
Posted by Michael Carter at 12:43 PM