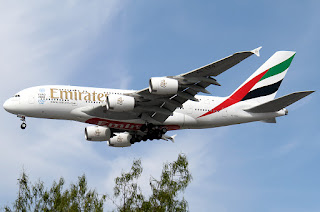 Emirates, the world’s biggest long-haul airline, plans to add 37 new planes to its fleet in the fiscal year beginning April as it expands operations in Asia with new destinations.

The airline will receive 21 Airbus Group SE A380 superjumbos and 16 Boeing Co. 777s in the year ending March 2017, Chief Commercial Officer Thierry Antinori said Wednesday in Singapore. The aircraft are worth $14.5 billion at list prices.

Emirates already serves about 150 destinations in about 80 countries using the industry’s biggest wide-body fleet. The Dubai-based airline will begin operations to Panama in February in what will be the longest nonstop commercial flight by any carrier, overtaking Qantas Airways Ltd.’s service to Dallas from Sydney.

Emirates has said it will fly to new destinations this year, including Cebu in the Philippines and two cities in China. The carrier had 247 aircraft in operations as of Jan. 17, with 257 on order.

Singapore Airlines Ltd. plans to operate A350-900ULR to restart the world’s longest non-stop flight to New York in 2018. Emirates canceled an order for 70 A350s in 2014 and is currently reevaluating its requirement for the model.