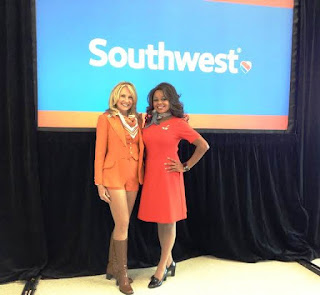 Southwest Airlines is in the midst of rolling some changes, including uniforms for employees and a new inflight drinks menu for passengers, as it continues to grow.

“I remember because I was wearing it,” Laraba said. The estimate cost of replacing all employee uniforms is about $23 million, she said.

However, Laraba noted that the new uniform cost covers 80 percent of the Dallas-based airline’s workforce. She thinks the new look will last 10 years.

Southwest has involved employees in the research of the uniforms, the decision making process and “wear” testing being done now, chief commercial officer Bob Jordan said. The airline is awaiting feedback, which could lead to some tweaks to the proposals, he said.

Here are some other new offerings from the Dallas-based airline:

* Southwest just introduced a new drinks menu on board with a long list of $5 mixed-drink options and drinks. It’s also starting to offer craft beer selections, such as Lienenkugel’s Oktoberfest.

* It will introduce new blue seats on the new Boeing 737 Max planes and on all new planes delivered in or after May 2016, Jordan said. The economy-section seats will be the widest in the industry, with a 32-inch pitch and a 17.8-inch width.

Southwest doesn’t plan to squeeze in more seats on the 737 Max, Jordan said.

“Rather than squeeze in another row of seats, our desire is to make more comfortable seats for our customers,” he said. “We want the best seat for our customers. That means personal comfort and leg space.