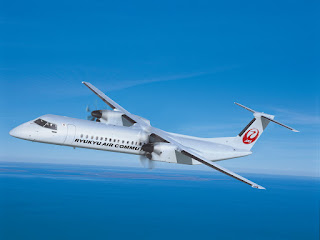 Japan-based Ryukyu Air Commuter is the launch customer for the combi variant of Bombardier’s Q400.

When Bombardier launched the Q400 Combi program last year, it said it had a launch order from an unidentified customer, and it kept that customer’s identity under wraps until today, with the announcement of Ryukyu’s order for five of the type.

Ryukyu Air Commuter is a regional subsidiary of the Japan Airlines Group, serving the southern Okinawa islands from its base in Naha, with a small fleet of Bombardier turboprops – four Dash 8-100s, and one Q300.

As can be seen in the picture, the Q400 combi’s cargo compartment is in the rear. It offers up to 32.5 cubic meters of volume and a payload of up to 4 tonnes (9,000 lbs). The forward compartment can accomodate up to 58 passengers, depending on seat pitch. List price is about $33.6 million.


(David Harris - Cargo Facts)
Posted by Michael Carter at 6:35 AM