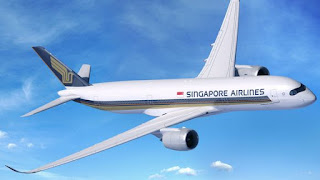 Singapore Airlines Ltd. is poised to regain the title of world’s longest flight with a nonstop service to New York.

The 19-hour journey covering more than 15,300 kilometers (9,300 miles) will beat the proposed 13,821-kilometer flight that Emirates intends to start in February from its Dubai home to Panama City.

Singapore Air will take delivery of an ultra-long range version of Airbus Group SE’s A350 in 2018 for the nonstop service, the carrier said in an e-mailed statement Tuesday.

“This will be the right equipment for Singapore Airlines to make the numbers work for them for the nonstop flights,” said Shukor Yusof, founder of Endau Analytics in Malaysia. “Singapore has the reservoir of business travelers around the region to make this work. This will help Singapore Airlines strengthen its U.S. market, where it was lagging.”

Iconic trans-Atlantic flights on the supersonic Concorde were scrapped more than a decade ago, and the shrinking of Wall Street firms and travel cutbacks since the global financial crisis have made it difficult for airlines to lure top-dollar clients.

“Our customers have been asking us to re-start nonstop Singapore-U.S. flights,” Singapore Air Chief Executive Officer Goh Choon Phong said in the statement. “We are pleased that Airbus was able to offer the right aircraft to do so in a commercially viable manner.”

Singapore Air had held discussions with Airbus and Boeing Co. on developing a plane with new technology that would allow it to fly nonstop to the U.S. profitably, Goh said in an interview in June. In 2013, the carrier stopped the Singapore to Newark, New Jersey, flights, adding about five more hours to travel between the cities.

The daily, all-business-class flights from Singapore to Los Angeles and Newark ended as the routes were not profitable with four-engine planes, analysts said previously. The airline was using a 100-seat Airbus A340-500. Using a plane with two engines would be more economical, as it’s designed for efficient long-range flights, analysts have said.

Singapore Air will take delivery of seven ultra-long range planes capable of flying up to 19 hours, Airbus said in a separate statement.

Optimized for nonstop flights to the U.S., the two-engine planes will ‎include a modified fuel system to increase fuel-carrying capacity, an increase in maximum take-off weight and other aerodynamic improvements, Airbus said.

Currently, Qantas uses a four-engine Airbus A380 superjumbo on the Sydney-Dallas service. The Emirates flight, which outstrips Qantas’s service by 17 kilometers, will use a two-engine Boeing 777-200LR.


(Kyunghee Park - Bloomberg Business)
Posted by Michael Carter at 10:01 AM