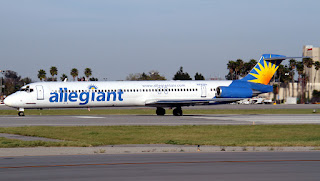 Las Vegas-based Allegiant Travel Co., parent of Allegiant Air, posted $44.5 million in net profit for the third-quarter, tripling its 3Q 2014 result. The company had reported net income of $14.1 million in the September 2014 quarter. It is the ultra-low-cost carrier’s 51st consecutive profitable quarter.

“[We continue] to benefit from lower energy costs and the profitable growth of our network,” Allegiant Travel Company chairman and CEO Maurice Gallagher said. “[It is] our belief that that growth rates should not exceed the capabilities of our infrastructure. We are … simplifying our operations where possible. Our eventual migration to an all-Airbus fleet is the biggest step in this effort.”

Allegiant’s third-quarter revenue was up 13.2% year-over-year (YOY) to $300 million as expenses fell 5.6% YOY to $222.9 million. The company’s operating profit for the quarter was $77.1 million, more than doubling its performance in the prior-year period. Allegiant’s total ancillary revenue (for air-related charges and third-party products) for the quarter was $117.4 million, up 37.8% YOY.

TRASM on Allegiant’s scheduled service fell 8.2% YOY to 11.38 cents due to the impact of the increased September 11 fee and the implementation of a credit card surcharge, Allegiant said; CASM on Allegiant’s total system dropped 23.5% YOY to 8.58 cents; the company’s operating CASM ex-fuel for the quarter was down 11.3% YOY to 5.95 cents.