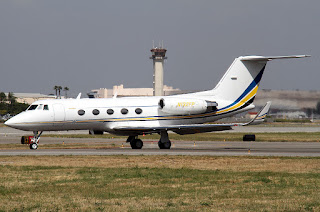 The next 6 were all built here before the company relocated the civilian component to Savannah, Ga. to improve production efficiency. Here they also found the needed supply of skilled labor, an established airfield adjacent to the plant site and sufficient acreage for expansion.

Transportation facilities suitable for heavy equipment as well as weather favorable to year-round flight-testing and flight-training further enhanced Savannah’s appeal. All subsequent Gulfstreams have been built in Savannah.

The new building in Chatham County opened in June 1967 and was officially dedicated on Sept. 29, 1967. It housed production and flight testing for the GII. The 100-person workforce that built the GII was 90 percent local and grew to more than 1,700 within a few years.


(Bob Holland & Gulfstream Corporation)
Posted by Michael Carter at 8:45 AM