Boeing 777 Has Enabled The Growth Of Emirates, Which Flies 150 Of Them 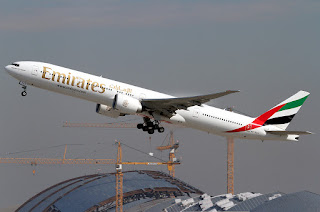 In the U.S., it is typically the low fare, low cost carriers, starting with Southwest,  that are most closely associated with specific types of aircraft.

Not so in Dubai.

A month ago, Emirates took delivery of three 777s on a single day, bringing its total to 150 including 13 freighters. (The cargo fleet also includes two Boeing 747s).

The Emirates strategy has been to establish a global hub in the Mideast and to connect passengers from throughout the world, particularly passengers from Asia and the Middle East to Europe and the U.S. The strategy requires a fleet of long-haul aircraft.

“Everything we do follows an extremely well mapped out vision,” said Hubert Frach, Emirates divisional senior vice president of the west. “The vision was clear from the very beginning: It’s about connecting people, places and economies.”

Additionally, he noted, throughout the world people “are becoming more affluent in terms of buying air travel. “

But you need the right aircraft. The 777 “is a very reliable aircraft in terms of size, configuration and performance parameters. It can fly almost 17 hours, and its on-time reliability is 99.5%,” said Frach, who previously headed global marketing for Lufthansa.

In a prepared statement, Tim Clark, Emirates president, said “The Boeing 777 makes up the majority of our fleet, and gives us the range and flexibility to provide non-stop services to almost any city within a 16 hour flying range of our hub in Dubai.”

On Sept. 3, Emirates began Dubai-Orlando service with an A380; on Oct. 1 it added a second daily Dubai-Boston 777 flight.

Emirates’ strategy has become controversial not only because of its own rapid expansion but also because of the similar, duplicative strategies employed by Mideast competitors Etihad and Qatar.

Particularly rapid U.S growth has prompted American, Delta and United to respond by calling attention to the government subsidies that have enabled it and have violated Open Skies policies.

(The Gulf carriers deny that they receive subsidies.)

Emirates notes that flying Boeing aircraft creates thousands of U.S. jobs, not just at Boeing but also related jobs. The US Department of Commerce has estimated that 5,359 U.S. jobs are created for every one billion dollars in value of U.S. export goods.

Boeing is the biggest U.S. exporter, and also one of the leading U.S. lobbyists, given its importance not only to commercial aviation but also to defense. For obvious reasons, however, Boeing has taken no position on the ongoing battle over subsidies to Mideast carriers, which pits one group of its customers against another group of its customers. Boeing’s position has been described as “aggressively neutral.”

Still, it’s hard not to like a customer whose business strategy is so closely tied to one of your products.