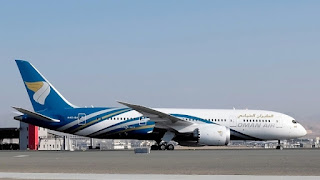 Oman Air has taken delivery of the first of six Boeing 787-8s from a November 2011 order.

The arrival of the first Dreamliner in Muscat marks the next stage of the airline’s ambitious expansion plans, which will see its fleet grow from around 40 aircraft to 70 by 2020.

CEO Paul Gregorowitsch said the “decision to invest in this game-changing airplane underlines our confidence in the 787 and the value it will add in terms of reliability, operational efficiency and comfort.”

Oman Air has announced it will deploy its first Dreamliner on services to Saudi Arabia and Europe. The carrier has ambitions to use its Muscat International Airport base—which is also being expanded—as a new Arabian Gulf hub for transit traffic.

“We’re proud to have Oman Air join our growing base of 787 customers in the Middle East and around the world,” said Boeing Commercial Airplanes President and CEO Ray Conner.

“Our partnership with Oman Air dates back almost 15 years during which time the airline has been operating the 737 family. We’re delighted to help introduce Boeing twin-aisle airplanes into its growing fleet.”

Boeing has also been contracted by Oman Air for a suite of services to support the entry into service of its 787s and to ensure ongoing efficiency and cost savings for its fleet. These services will help Oman Air minimize the time and cost of maintenance while increasing airplane availability.

Boeing says it has eight 787 customers in the Middle East, operating 175 of the type, with a further backlog of 140.