40% of Bizjet Pax Plan To Fly More in Next Year 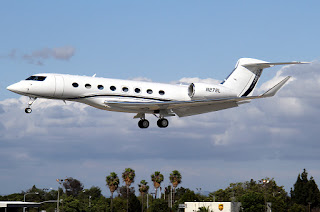 Survey respondents said that the Gulfstream G650 topped their most-wished-for-aircraft list in the ultra-long-range business jet category. Other top aircraft in other categories included the Pilatus PC-12, King Air, Embraer Phenom 100 and 300, Cessna Citation X and Gulfstream G450.
In the above photo, Gulfstream G650 (c/n 6038) N278L operated by Nantworks LLC is captured arriving at Long Beach Airport (LGB/KLGB) on May 20, 2014.
(Photo by Michael Carter)

Nearly 52 percent of current business jet users plan to fly the same amount over the next 12 months, while nearly 40 percent say they will fly a bit more (32 percent) or a lot more (7.9 percent), according to the just-released results of the Fifth Annual Readers' Choice Survey from AIN sister publication Business Jet Traveler.

About half said they flew the same amount over the past year as during the year before, while 21.7 percent flew a bit more and 15 percent a bit less. Only 7.7 flew much less and 5.9 percent much more.

Not surprisingly, survey respondents said “saving time” was the number-one reason that they fly on business aircraft, followed by the ability to fly into airports not served by airlines and the ability to work and hold meetings in flight.

According to the survey, the most attractive feature of an aircraft is economical operation, with range, cabin size, aircraft manufacturer and age of aircraft rounding out the top five; baggage space was at the bottom of the list. Respondents’ business aircraft wish list included the Pilatus PC-12 at the lower end and the Gulfstream G650 at the top end.


(Chad Trautvetter - AINOnline News)
Posted by Michael Carter at 8:00 AM