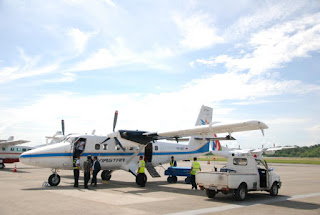 Indonesian authorities launched a search on Friday for a Aviastar airline Twin Otter turboprop aircraft with 10 people on board that went missing on a domestic flight on Sulawesi island.


Indonesia has a patchy aviation safety record and has had three major air crashes over the past year, including an AirAsia flight that went down in the sea on a flight from Bali to Singapore in late December, killing all 162 people aboard.


The Transportation Ministry said a search has begun for the aircraft that lost contact on a flight from the town of Masamba, about 30 minutes before its was scheduled to land in Makassar city.


"It was around 60 nautical miles from Makassar," ministry spokesman J.R. Barata told MetroTV.

"We have now started a search."


"Most importantly, we will work out its position first," Barata said adding that 10 people - seven passengers and three crew - were on board.


Aviastar, which flies domestic routes, said it had lost contact with the aircraft in the mid-afternoon and it had then contacted search authorities.


According to Aviation-safety.net, Aviastar has had four fatal incidents, including the crash of a British Aerospace 146-300 aircraft in the eastern province of Papua in 2009, killing all six crew on board.


In August, a passenger airliner crashed in Papua killing all 54 people aboard.


More than 100 people were killed in June in the crash of a military transport plane in the northern city of Medan, prompting the government to promise a review of the aging air force fleet.


Struggling to cope with the expansion of air travel, Indonesia scored poorly on a 2014 safety audit by the U.N. aviation agency.