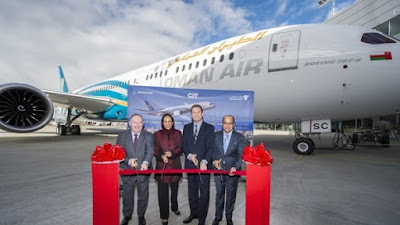 Oman Air has taken delivery of its first Boeing 787-9. The stretched version of the wide-body aircraft joins four 787-8s in the fleet.

The Omani flag carrier has outfitted its latest addition with a two-cabin layout comprising 30 lie-flat business-class seats, plus 258 economy-class seats. This compares to 18 business- and 249 economy-class in the smaller variant.

A second 787-9 is scheduled to join the fleet in April 2017. The new arrivals will be used on the carrier’s European and Far Eastern routes.

The airline is rapidly expanding as it heads toward a fleet approximately 70-strong by 2020. There are now 50 aircraft on strength, including two new Boeing 737-800s delivered since the start of 2017.

The fleet still includes four Embraer E-175 regional jets that were scheduled to leave the fleet by early 2016, but have been retained for domestic sectors and flights around the Gulf. They are still planned to be phased out when suitable replacements have been found, but no firm date has been set.

The airline has been consistently loss-making over recent years as it expands. The state-owned carrier is regarded as an instrument of the national economy; the Arabian nation has been building up its tourism industry steadily over the past two decades and this is now accelerating as more mid-range hotels start to be added to the previous preponderance of luxury accommodation.

The government has heavily underwritten the state carrier, but the level of support has been dropping sharply in the last few years, partly because of the slump in oil revenues. Oman Air said in 2016 it had planned to more than double its contribution to the national economy in 2017, to RO900 million ($2.3 billion), compared to 2016.