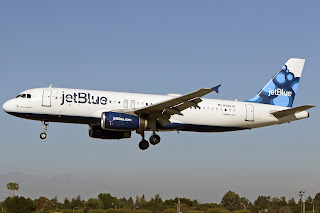 “It’s a new day for Atlanta travelers, who for too long have faced high fares and limited choices,” JetBlue VP-sales and revenue management Dave Clark said. When the new route was first announced by JetBlue in September 2016, EVP-commercial and planning Marty St. George described Boston as having been “underserved by high-fare legacy carriers [for decades].”

A price comparison researched by ATW on a comparative scheduling for the first week in May (i.e., an economy/main cabin Monday 6 a.m. flight from Boston, with an economy/main cabin Friday 7 p.m. return flight from Atlanta) showed JetBlue with a $92 price advantage on a round-trip ticket. When compared with Delta’s basic economy offering, JetBlue still undercut Delta’s price by $12.


(Mark Nensel - ATWOnline News)
Posted by Michael Carter at 11:01 AM

Grate article, We at Addhunters shifted this service to a
level much higher than the broker concept. you can see more
details like this article
Installment plans in pearl qatar