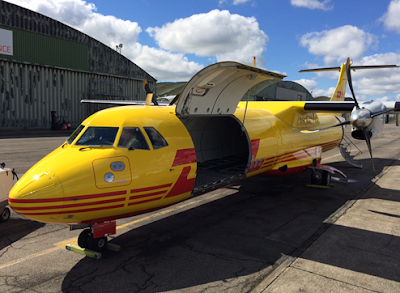 IPR holds the STCs to perform both bulk-load and large-door modifications on the ATR72-200 and -500 series turboprobs. The first STC is for what IPR refers to as a “structural tube” conversion in which the floor is secured and the windows are plugged. A second option includes the installation of a large cargo door (LCD) 116” x 71” which allows for the loading of up to five containers or pallets with dimensions of 88″x 108″.

DHL has opted for the LCD configuration for the most recent aircraft (463), which is equipped with an Ancra cargo loading system. Solenta will induct the aircraft into its fleet of ATR freighters which fly on behalf of DHL in mostly inter-African regional service, connecting Senegal, Guinea, Sierra Leone, Liberia, Cote d’Ivoire, Mali and Mauritania. IPR says it has orders for at least three more ATR72 LCD conversions with Ancra cargo systems.