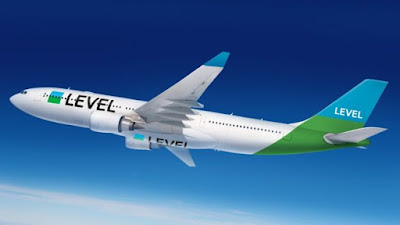 The owner of British Airways is launching a new long-haul budget airline based in Barcelona.

The airline will use Iberia crew and two new Airbus A330 planes.

"Barcelona is Vueling's home base and this will allow customers to connect from Vueling's extensive European network onto Level's long-haul flights," he said.

The company will look to offer Level flights from other European cities. "We're really excited about the opportunities for expansion," Mr Walsh added.

Travel writer and broadcaster Simon Calder said the new airline was good news for travelers as more competition would put pressure on fares.

He said IAG's move echoed Lufthansa's decision to offer flights to destinations in the Caribbean and Asia on Eurowings, its low-cost offshoot.

It was also an attempt to counter the challenge posed by low-cost newcomers such as Norwegian Airlines.

As well as operating Boeing 787 services from London Gatwick airport to cities such as Orlando, Las Vegas and New York, Norwegian plans to offer direct flights to the US using smaller Boeing 737 planes from the likes of Belfast and Edinburgh.

Mr Calder said that move would put even more pressure on traditional airlines such as BA and Iberia.

"IAG's decision to expand with a separate low-cost brand safeguards the image of its flag-carrier brands," he said.

"The real trick will be to start Level on as high an efficiency point as possible, this being a crucial factor that distinguishes winners and losers in the budget airline sector."

Shares in IAG were flat at 571.1p on Friday but have risen by almost 30% since the start of the year, valuing the company at more than £12bn.

(Chris Johnston - BBC News)
Posted by Michael Carter at 10:49 AM