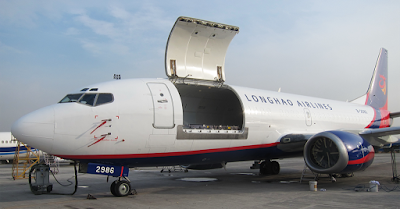 Early this morning, Guangzhou-based all-cargo start-up, Longhao Airlines put its first 737-300F into revenue service on a flight between Jiangsu Nantong Xindong Airport (NTG) and Guangzhou Baiyun Airport (CAN). The carrier, which has already inked a deal to carry cargo on behalf of Shenzhen-based SF Express Airlines, has ambitious plans to put five freighters into service each year over the next decade, with a target fleet size of 50 aircraft by 2025.

While 50 aircraft might sound like a bit of a stretch, Longhao has already acquired its first three aircraft. Like its first PEMCO 737 conversion (29069, ex-China Eastern), units two and three will be converted at the STAECO facility in Jinan. During a launch ceremony held in Guangzhou, Longhao Airlines president, PEI Guo Xiao said that shortly after Longhao takes redelivery of its second 737F sometime next month, it will launch flights between Quanzhou-Nantong-Tianjin.

If everything proceeds as planned, Longhao’s network will gradually expand beyond the borders of China to include destinations in Southeast Asia, and the United States. We note however, that despite strong financial backing from its parent company SF Express, SF Airlines which received its first aircraft in 2010, did not launch international flights to Ukraine until this year. Rapid fleet expansion faces many obstacles in China, including flight crew shortages and delays in receiving CAAC approval to add new aircraft and launch new routes. However, the fact that SF Express will have access to most of Longhao’s cargo capacity could facilitate smoother growth.

In addition to the 737 classic freighter conversions, Cargo Facts believes Longhao possesses options for additional 737 classic and 737-800BCF conversions. Additional orders likely exist, but have not yet been announced.


(Charles Kauffman - CargoFacts)
Posted by Michael Carter at 12:52 AM

Discover how to book free flights with Travel Hacking.