On March 15, 2017, I was very pleased to capture all three Boeing 737's operated by Oakland, California based Kaiser Air at Long Beach Airport (LGB/KLGB). The carrier was operating special charter flights for the online search engine giant, Google. I hope you enjoy the following photos and each aircraft's history. 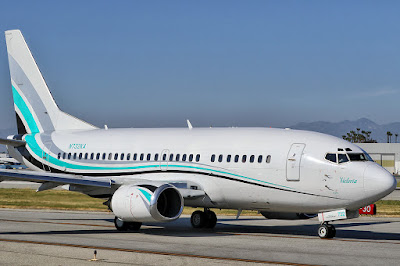 Taxies on Delta towards a Rwy 30 departure. 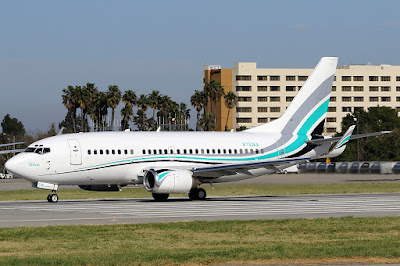 The aircraft began life almost 26 years ago being delivered to Scandinavian carrier Linjeflyg as SE-DNE on April 15, 1991. On January 1, 1993 the carrier was merged into Scandinavian Airlines System (SAS) and the aircraft returned to leasing company BBAM.

On March 15, 1993 it was leased to British Midland as G-OBMX and operated with the British carrier until being transferred to bmi British Midland on February 1, 2001 and again returned to leasing company BBAM.

On March 24, 2001 the aircraft joined the Luxair fleet as LX-LGN and served with the carrier until once again going back to BBAM in early 2005.

April 7, 2005 saw the aircraft join the Czech Airlines (CSA) fleet as OK-WGD "Rakovnik" where it would serve until being leased to Aeroflot-Nord (an Aeroflot regional carrier) as VP-BKP on June 15, 2008. On December 1, 2009, Aeroflots association with the regional company ended and the carrier became known as Nordavia which still operated the aircraft as VP-BKP until it was withdrawn from service and stored on October 12, 2011.

The aircraft was acquired by Southern Aircraft Consultancy on February 28, 2014 and fitted with winglets in March 2014.

The aircraft was bought by current operator Kaiser Air on April 29, 2014.

Posted by Michael Carter at 2:59 PM