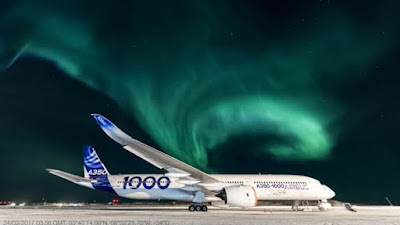 The Airbus A350-1000, the larger variant of the A350 slated to seat 366 passengers in a typical three-class configuration, has undergone rigorous ground and flight tests in the extreme operating conditions of Iqaluit, Canada.

The Toulouse-based manufacturer said, “Iqaluit, a Canadian territory with a polar climate caused by the Labrador Current, allows Airbus’ longest-fuselage A350-1000 version to face-off against one of the most challenging environments for an aircraft.” Airbus said the jetliner “successfully completed five days of intensive testing at an outside air temperature (OAT) that fluctuated between -28 degrees and -37 degrees Celsius.”

Airbus flight test engineer Emanuele Costanzo said, “The A350-1000 has responded successfully to the ground and flight tests performed in the freezing temperatures of Iqaluit—which demonstrates the already proven maturity and reliability of the A350 XWB.”

All three A350-1000 flight test aircraft have been engaged in the type certification campaign.

If you need your ex-girlfriend or ex-boyfriend to come crawling back to you on their knees (even if they're dating somebody else now) you need to watch this video
right away...

(VIDEO) Have your ex CRAWLING back to you...?