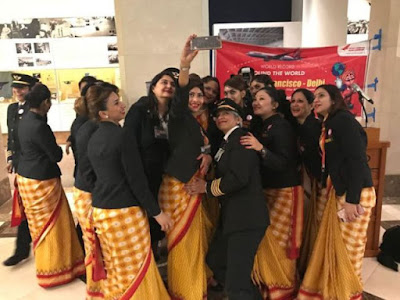 India's national airline claims to have made the first round-the-world trip staffed entirely by women.

An Air India Boeing 777 flew from Delhi to San Francisco over the Pacific Ocean, covering around 9,500 miles (15,300 km), the carrier said. It then made the return trip across the Atlantic.

In addition to female pilots and cabin crew, all ground staff working with the plane - including safety auditors, engineers and air traffic controllers - were women.

The airline said the trip was “another feather to Air India's cap in its constant endeavor to encourage women”.

India Air said it has already contacted Guinness Book of World Records to document the flight.

It is not the first initiative the carrier has introduced to promote gender equality.

In January, it announced there would be designated female only seats on all domestic flights for women traveling alone.

The decision came after a spate of sexual harassment reports on board Air India flights.

(Will Worley - The Independent)
Posted by Michael Carter at 6:41 AM