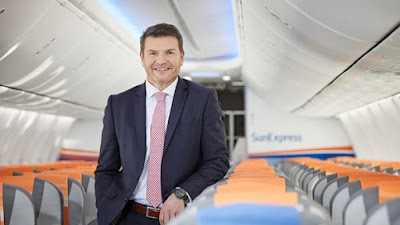 SunExpress, a joint venture of Lufthansa and Turkish Airlines, plans to increase capacity throughout its network, despite a difficult operating environment.

“For 2017, we are focusing not only on stabilizing routes to Turkey, but also on adjusting our network if necessary,” SunExpress CEO Jens Bischof told ATW in Frankfurt.

Along with the rest of the European airline industry, Bischof said Antalya-based SunExpress experienced “challenging conditions” in the tourism sector as a result of a series of terrorist bombings and a failed coup attempt in Turkey last year, which depressed yields and slowed bookings as demand decreased.

Bischof said its Turkish AOC “offers opportunities to tap into new markets like in Russia, the Levant region, Middle East or even Central Asia, to countries like Kazakhstan.”

For the summer 2017, SunExpress will increase capacity to Turkey from Germany, Switzerland and Austria by 26% to 450 weekly flights.

Bischof said the carrier plans further growth for its A330 fleet from 2018 onward, “but this depends on Eurowings’ long-haul strategy.”

He did not rule out more wet-leases for Eurowings and AnadoluJet. “Our cost base per available seat kilometer is right there like [UK LCC] easyJet or [Irish LCC] Ryanair,” he said.

The first 737 MAX 8 is expected for delivery in 2019, but Bischof said the carrier has not yet decided which routes the new aircraft will be flying.

To handle the seasonality of its fleet during the European winter months with less demand, SunExpress signed off five 737s from service at the end of 2016.